So after touring Athens from end of July till mid-August, we left Greece again and flew to the US to visit family in one of my favourite cities in the world; Boston. While there, we roved through some very interesting staples and if you had been following me on IG at the time {http://instagram.com/kickingbackthepebbles}, you may have caught a “live tour” around the city. Here’s a more detailed account of what we’ve been up to: first stop, the Museum of Fine Arts. 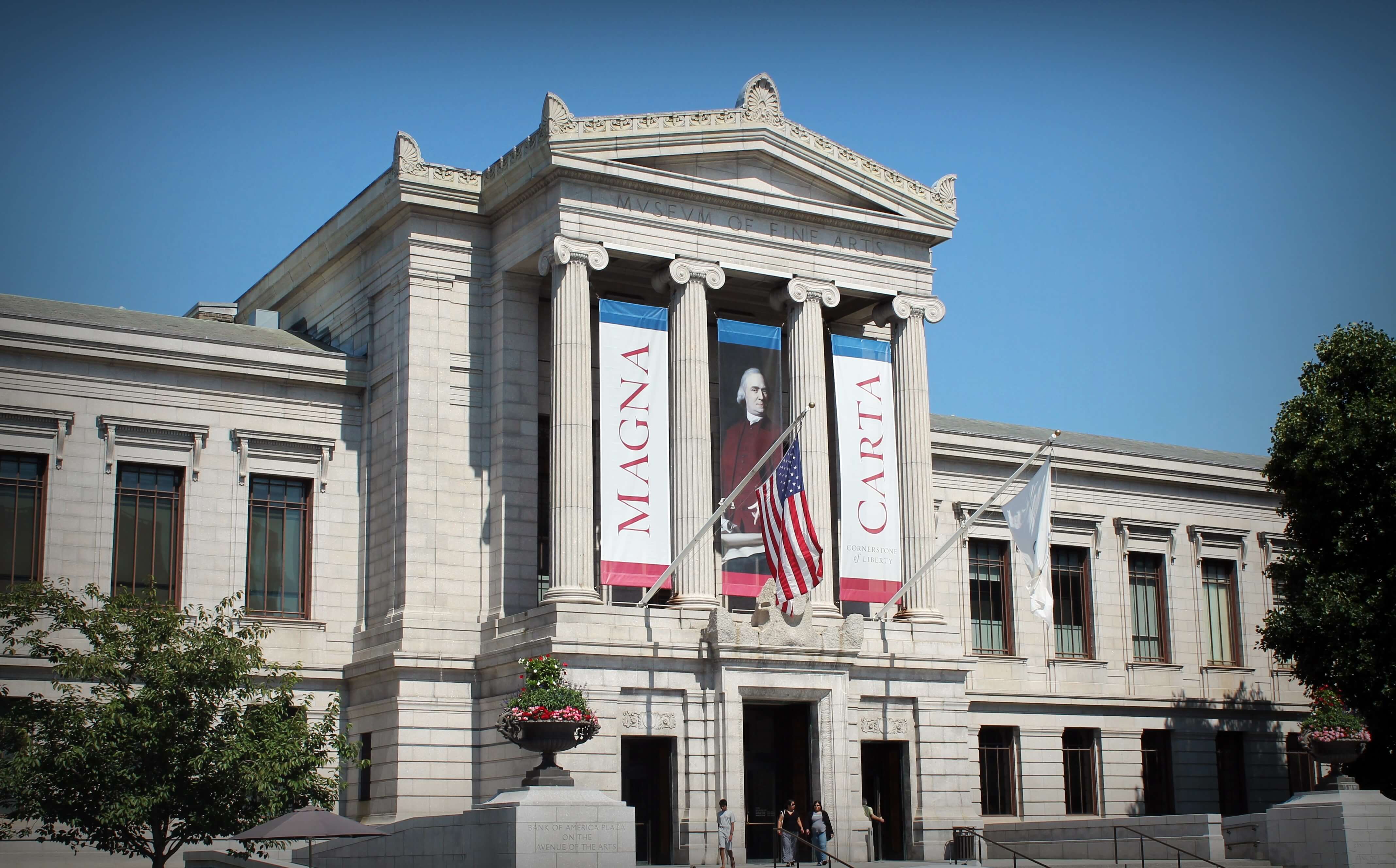 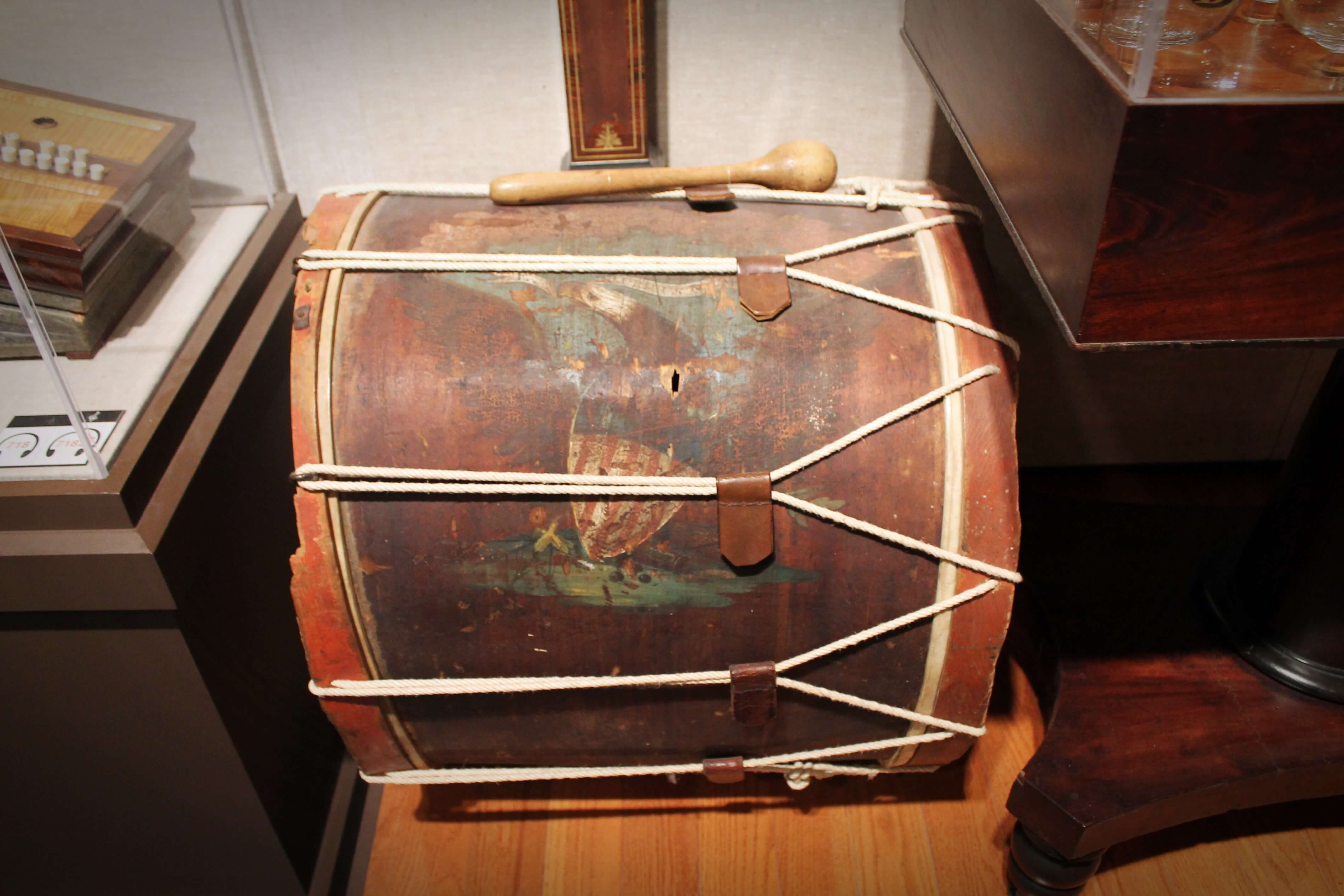 Bass Drum. Boston Massachusetts, about 1815. Made by Frederick Lane (American, 1791-1865). Ash, calfskin. Drums were essential signaling equipment for militia units in all early American towns. Records provided by the selectmen of Alna, Maine, indicate that a bass drum -quite possibly this one- was purchased for that towns militia company in September 1820. The painted eagle and shield on this drum are typical decorations. Musical Instrument Gallery (Gallery 103D). 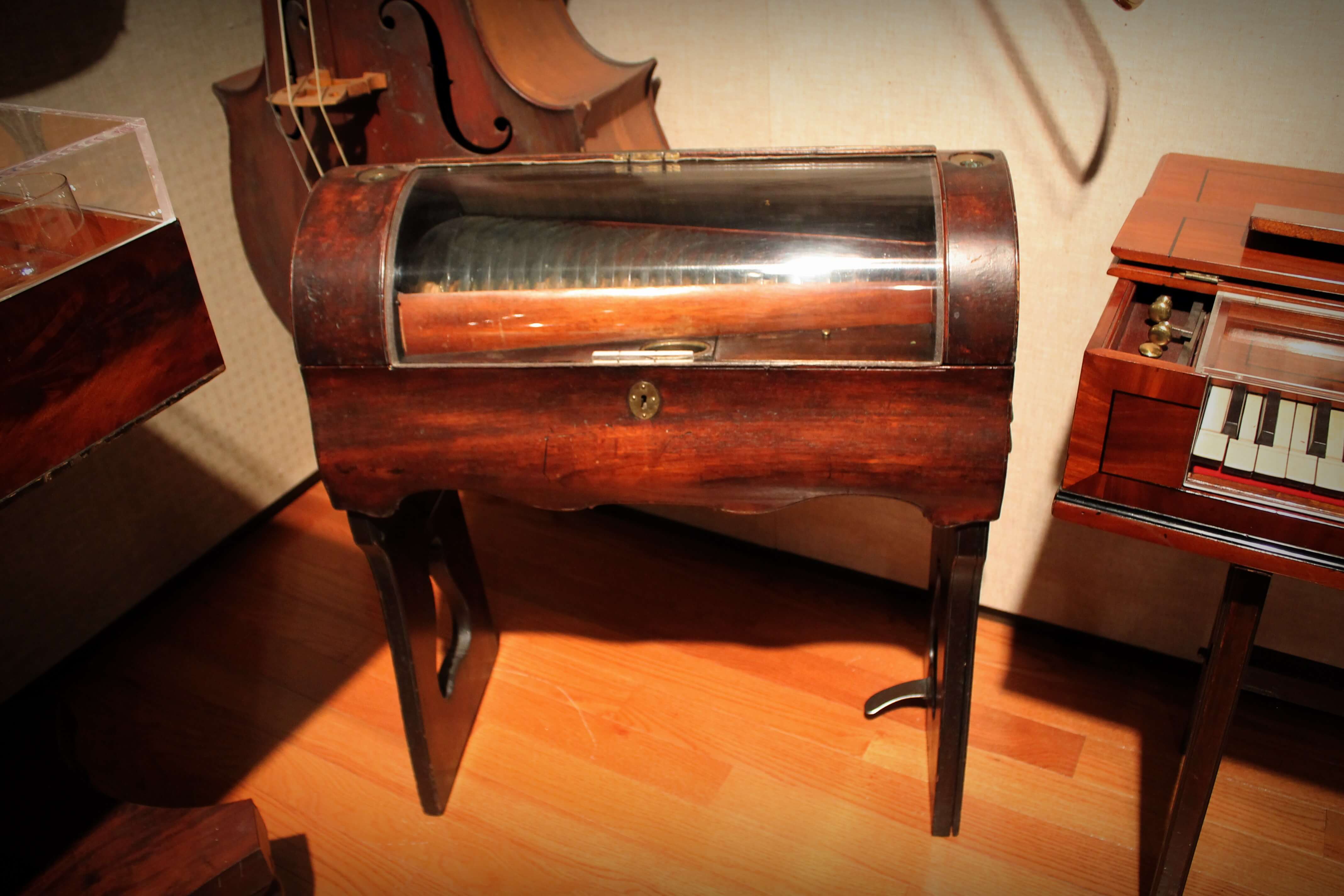 Music Glasses (armonica). Probably Germany, early 19th century. Mahogany, lead glass. Invented by Benjamin Franklin in about 1761, the armonica consists of a set of granulated glass bowls mounted concentrically on an axle and rotated by means of a foot pedal and flywheel. When the player lightly touches the moving glass rims with moistened fingers, the instrument produces an unusual, ethereal tone. Mozart and Beethoven wrote pieces for this instrument, which was briefly in vogue in both Europe and America. Musical Instrument Gallery (Gallery 103D). 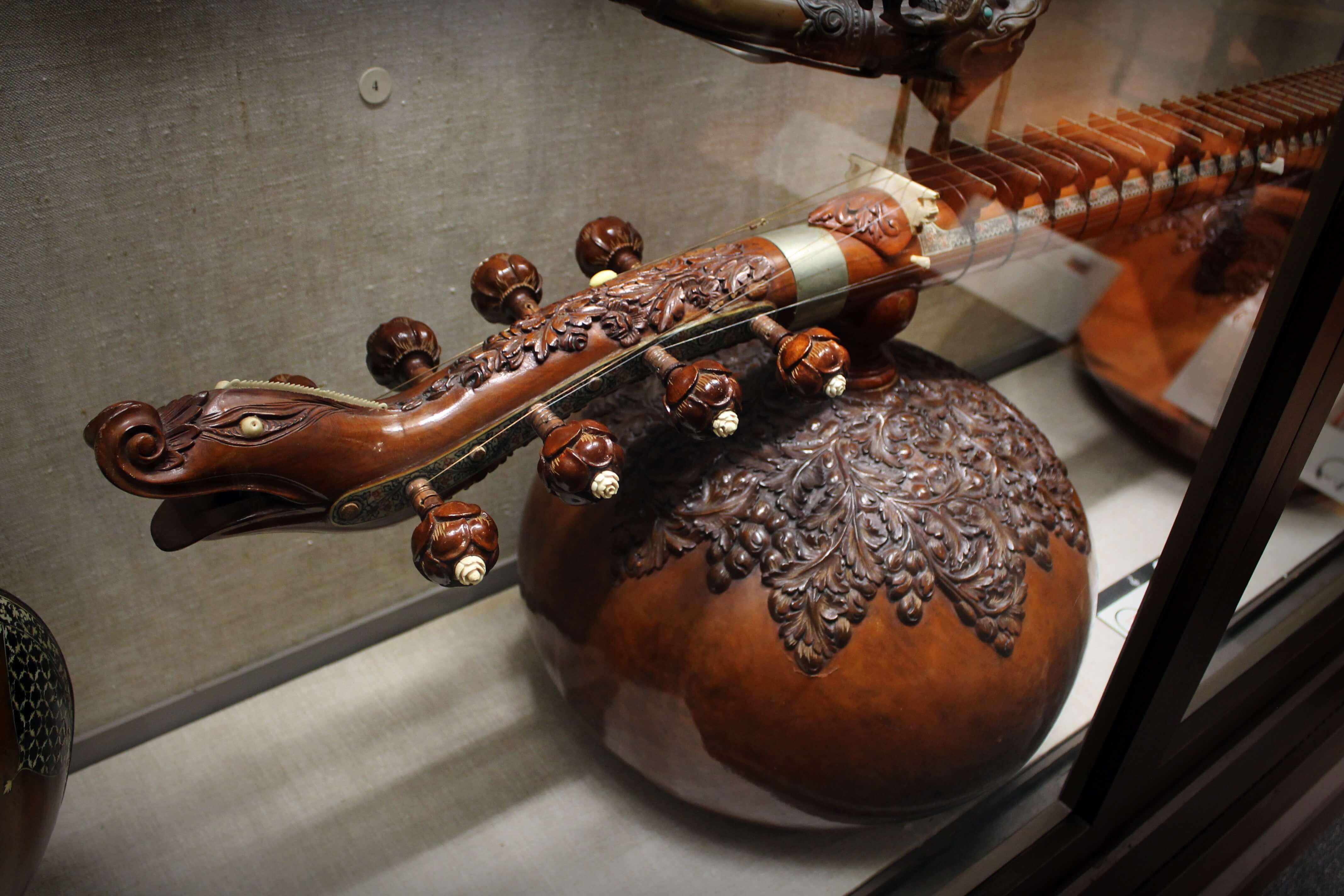 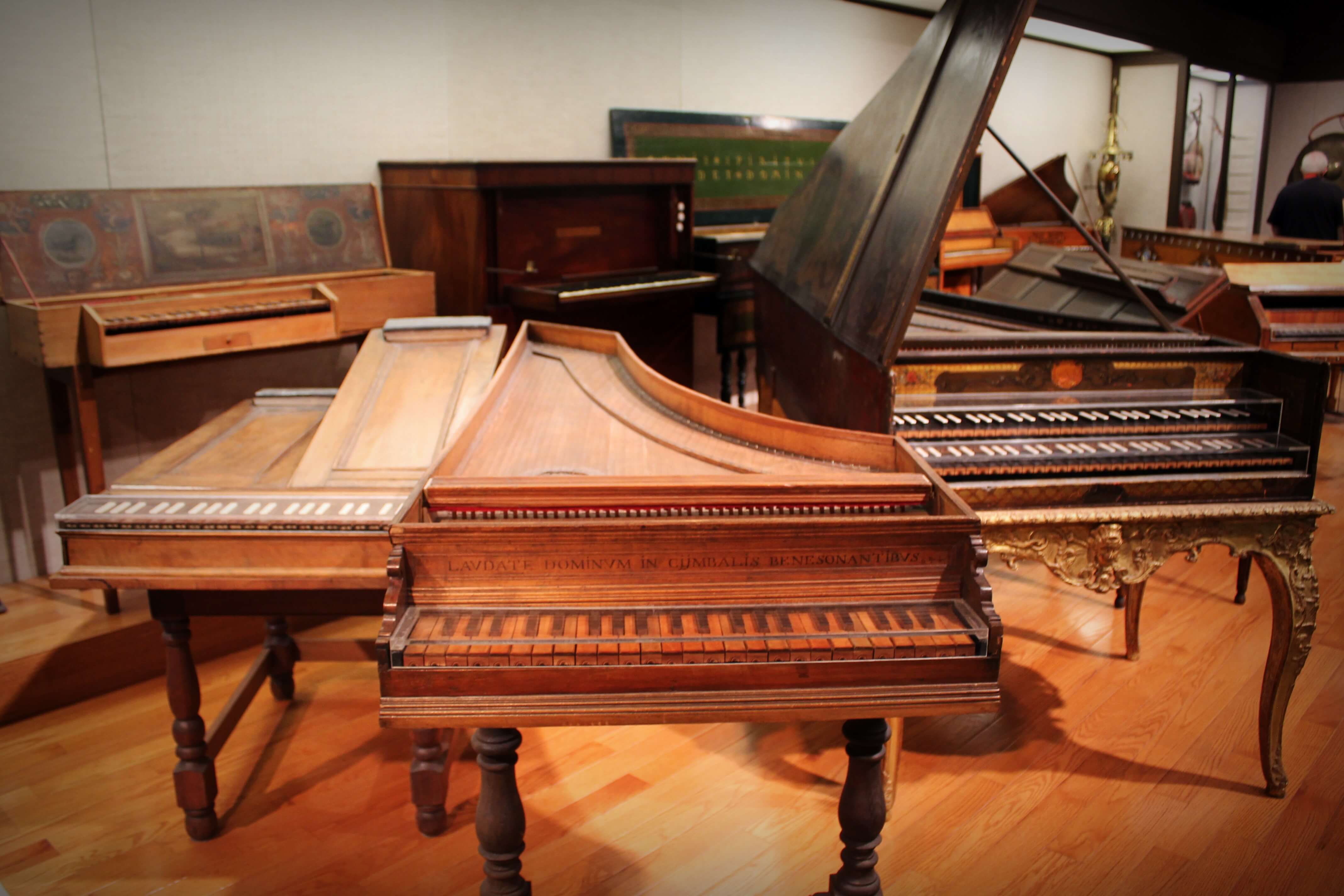 The museum was founded in 1870 and opened in 1876. It was originally located in a brick Gothic Revival building on Copley Square. In 1907, plans were laid to build a new home for the museum on Huntington Avenue. Museum trustees hired architect Guy Lowell to create a master plan for the museum that could be built in stages as funding was obtained for each phase. In 1909, the first section was completed; it featured a 500-foot (150 m) facade of cut granite along Huntington Avenue, the Grand Rotunda, and the associated exhibition galleries. The museum moved in later that year. In the second phase of the construction a wing was built along the Back Bay Fens to house painting galleries. It opened in 1915. From 1916 through 1925, John Singer Sargent created the art that lines the Rotunda and the associated colonnade. Numerous additions/wings enlarged the building throughout the years. In the mid-2000s, the museum launched a major effort to renovate and expand its facilities. The work included a new Art of the Americas Wing that shows art from North, South, and Central America. Ultimately, the project added 133,500 square feet (12,400 m2) of space, enlarging the building by 28%. The Stairway leading to the Grand Rotunda & the Rotunda Dome can be seen below… 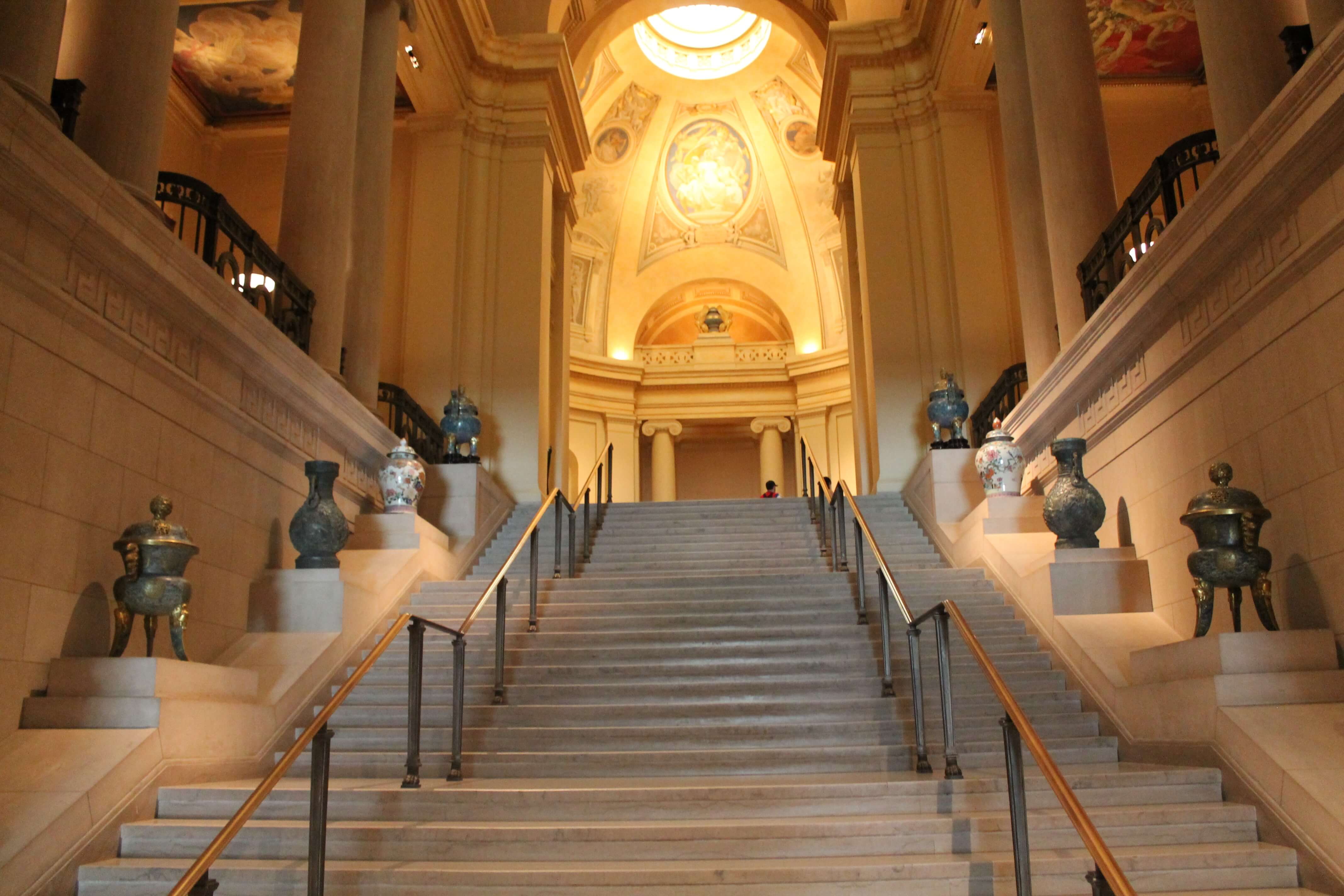 This is a “true” close-up shot of the Dome, while looking straight up… 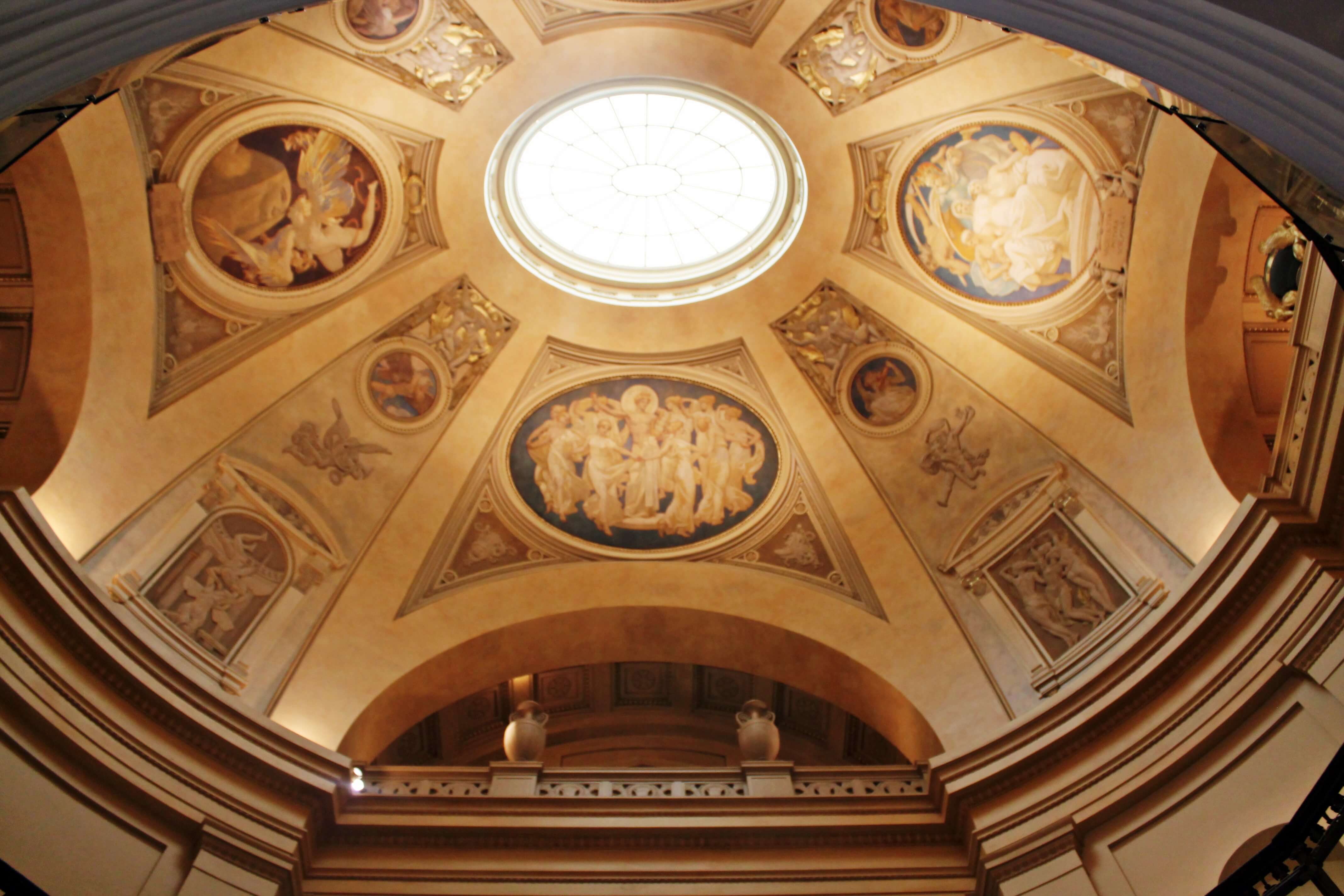 …and this is a shot through the horizontal mirror that’s installed at the center of the ground floor reflecting the Dome, from down below! 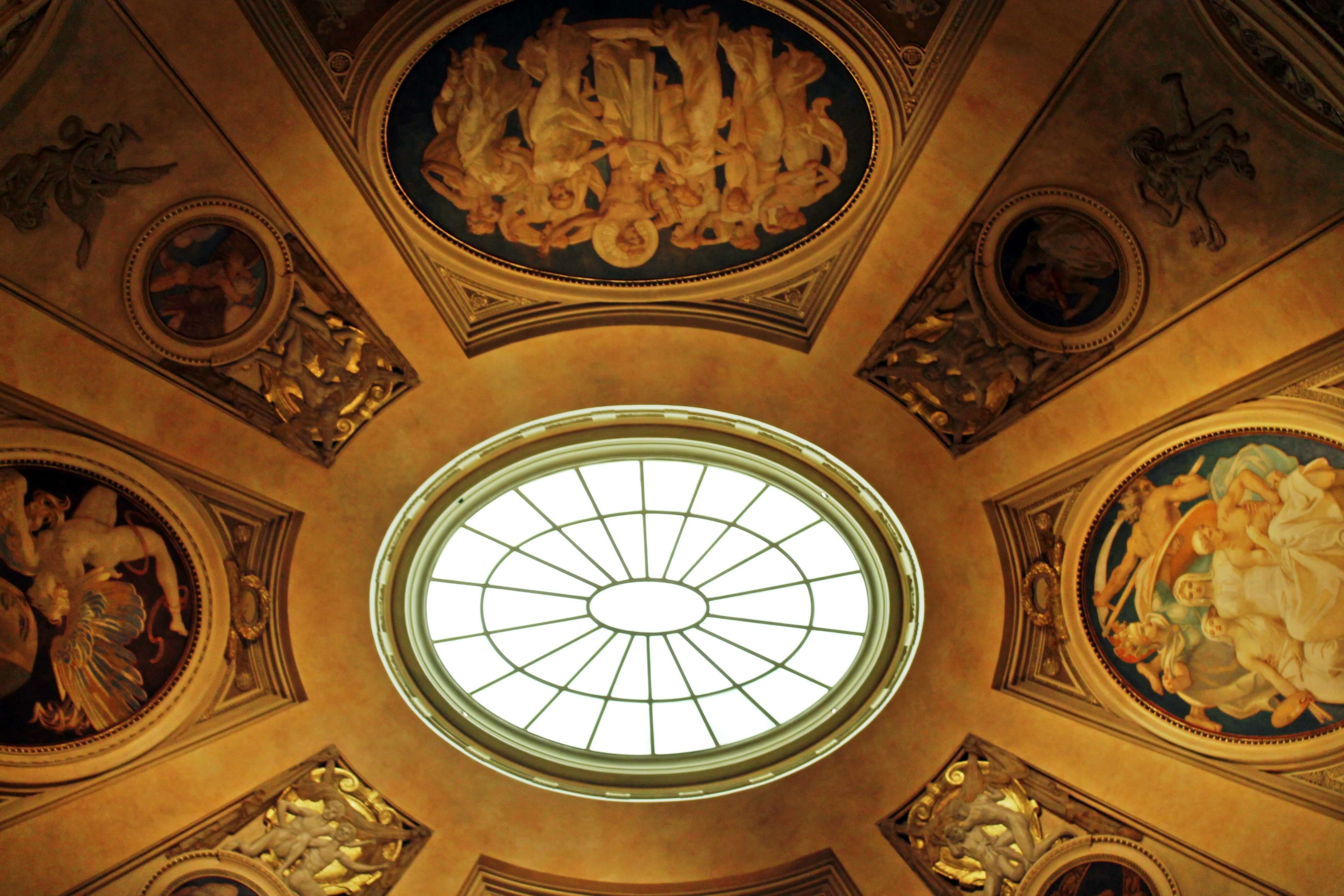 And then we got lost -both literally & metaphorically- for hours on end, through the innumerable galleries… 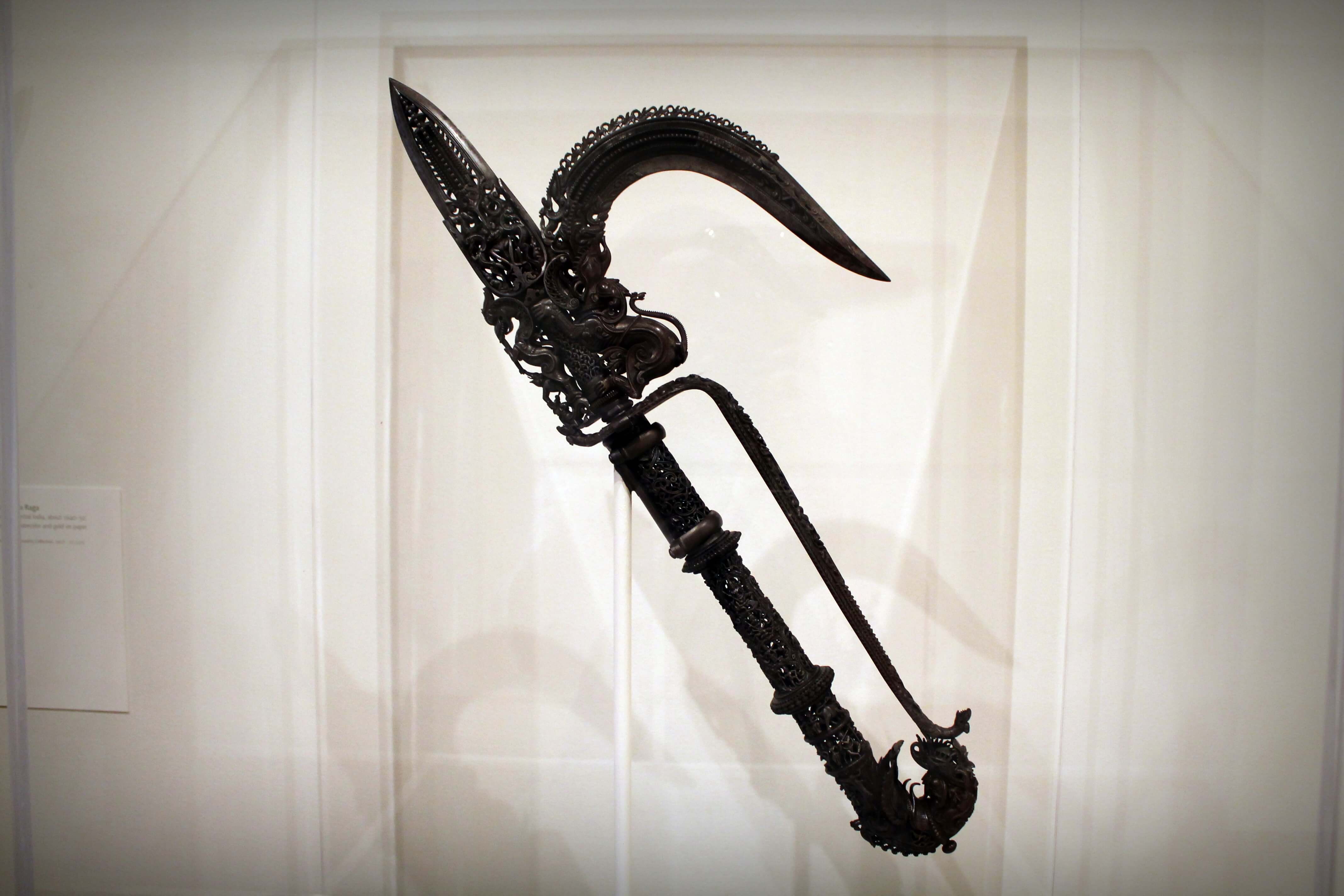 Elephant goad. South India, Nayaka period, probably early 17th century. Steel. In India, elephants are symbols of royal splendor, the preferred mounts of gods and kings. Almost every surface of this extraordinary goad -an implement for steering elephants- is covered with mythical creatures, earthly animals and gods. It was surely commissioned by royalty, who would have carried it during a courtly procession. Corridor between Islamic Gallery and Huntington Lobby ( 183). 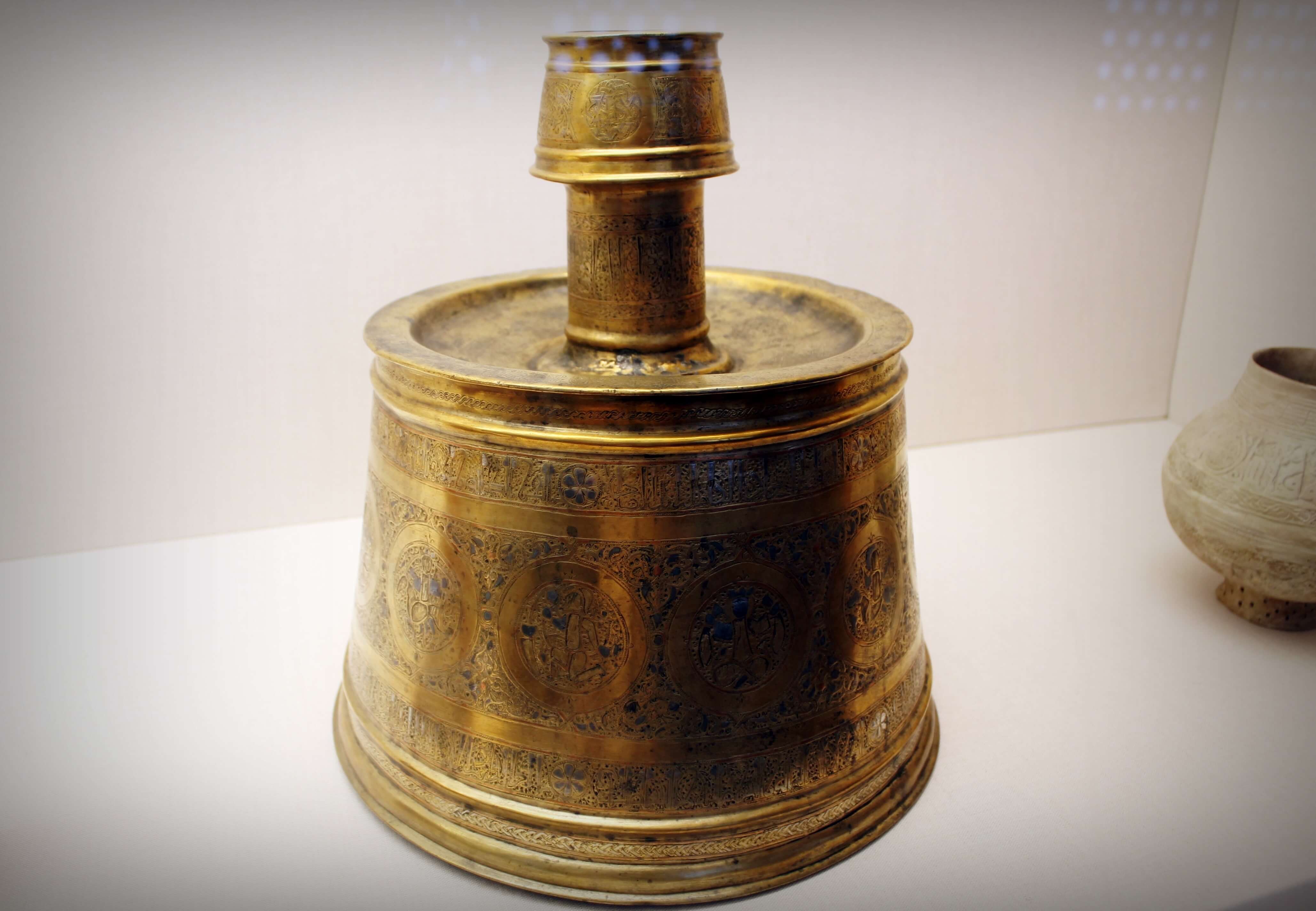 Candlestick. Syria, about 1250. Brass incised and inlaid with silver and copper. Arabic calligraphy encircles the body of this candlestick, offering wishes of wealth, power and good fortune to the candlestick’s owner, sentiments that often appear on works of Islamic art. The artist used two different styles of script: angular Kufic above and shapely Naskh below. Between the calligraphic bands are large roundels depicting classical Greek gods [!!!] and symbols of the zodiac. Islamic Gallery (Gallery 175). 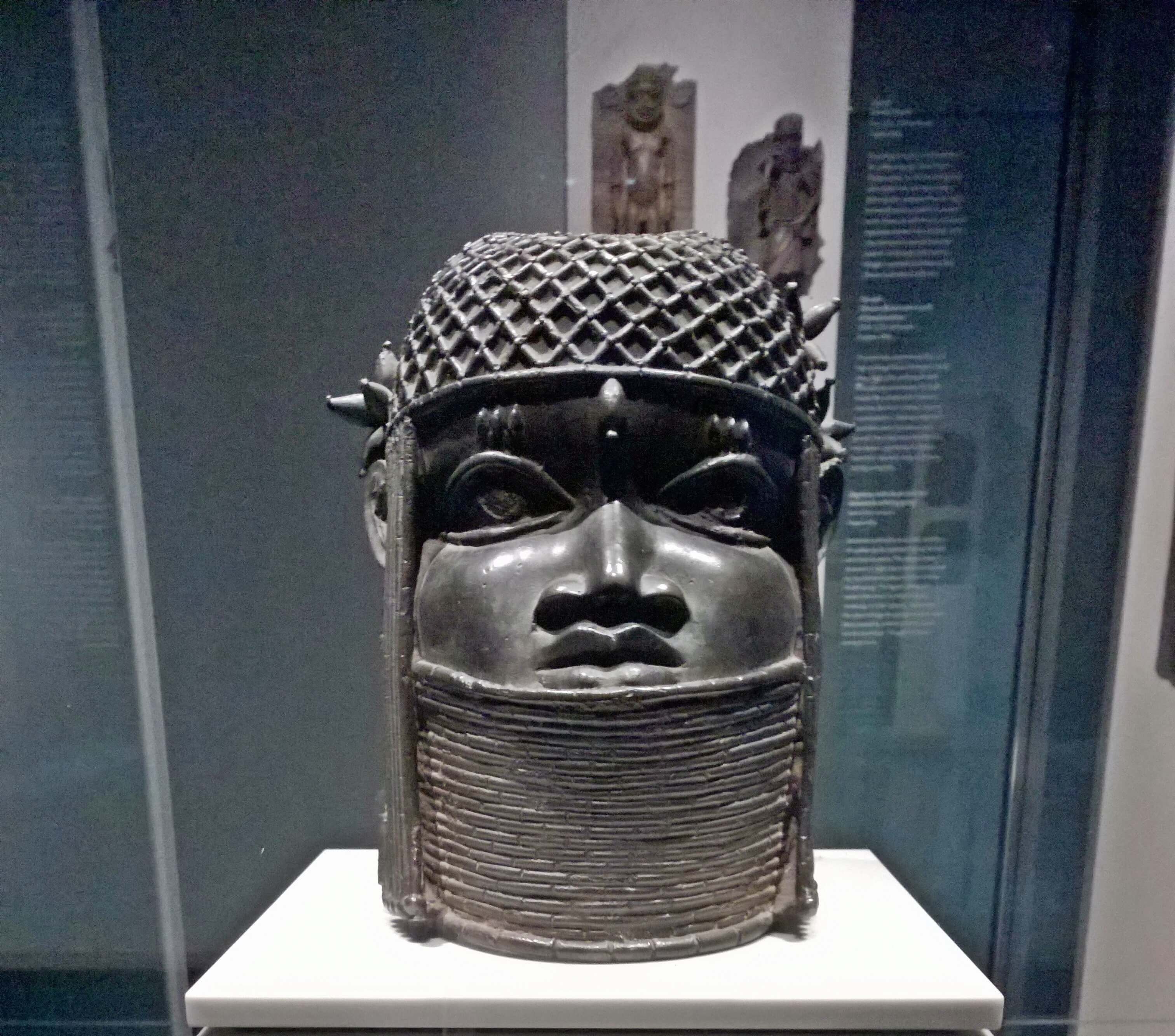 Commemorative head of an Oba. Late 16th century. Copper alloy, iron. When the Oba [king] joins the ancestors, his senior son succeeds him. To honor his father and celebrate his accomplishments, historically the new Oba would commission a bronze head representing ideal kingship.  The heads were part of an ancestral altar ensemble in the palace and supported decorated ivory tusks —a valuable material associated with royal power. Through rituals and sacrifices at the altar the living monarch communicated with the royal ancestors and assured the well-being of the kingdom. Benin Kingdom Gallery (Gallery 172). 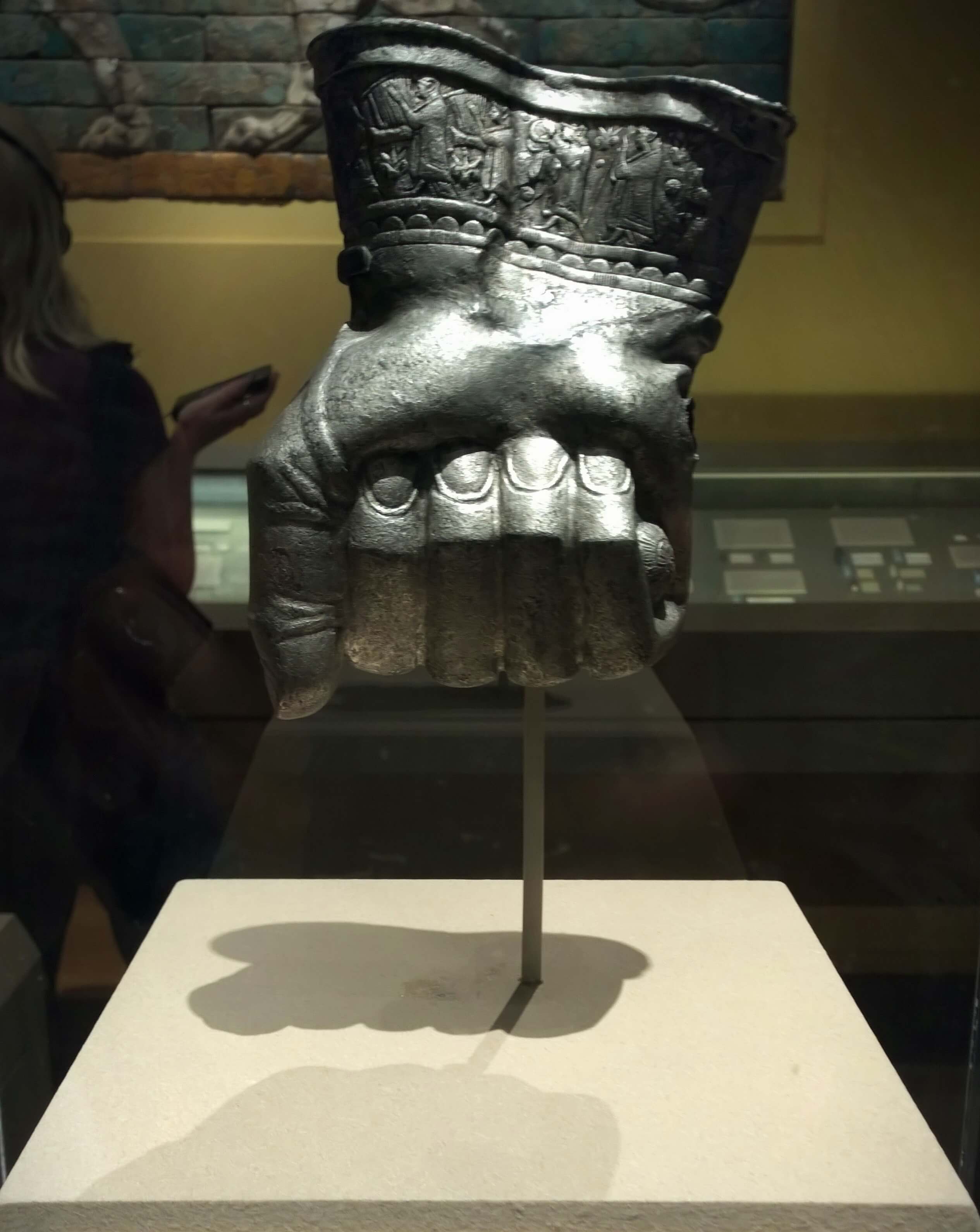 Drinking cup in the shape of a fist. Central Turkey, Hittite, probably reign of Tudhaliyas Ill, about 1400-1380 BC. Silver. Surviving Hittite objects in precious metal are very rare. This cup was evidently used for rituals connected with the weather god, Tarhuna, who appears holding a bull in the frieze around the rim. The named donor of the cup was “Great King Tudhaliyas,” who is shown leading priests and musicians from a city over a mountain, personified as a human figure covered with leaves. The fist shape probably evoked a Hittite hieroglyph meaning “strength,” and the cup may have been presented to the god so that he would grant strength to the royal donor when the contents were drunk. Ancient Near East Gallery (Gallery 110). 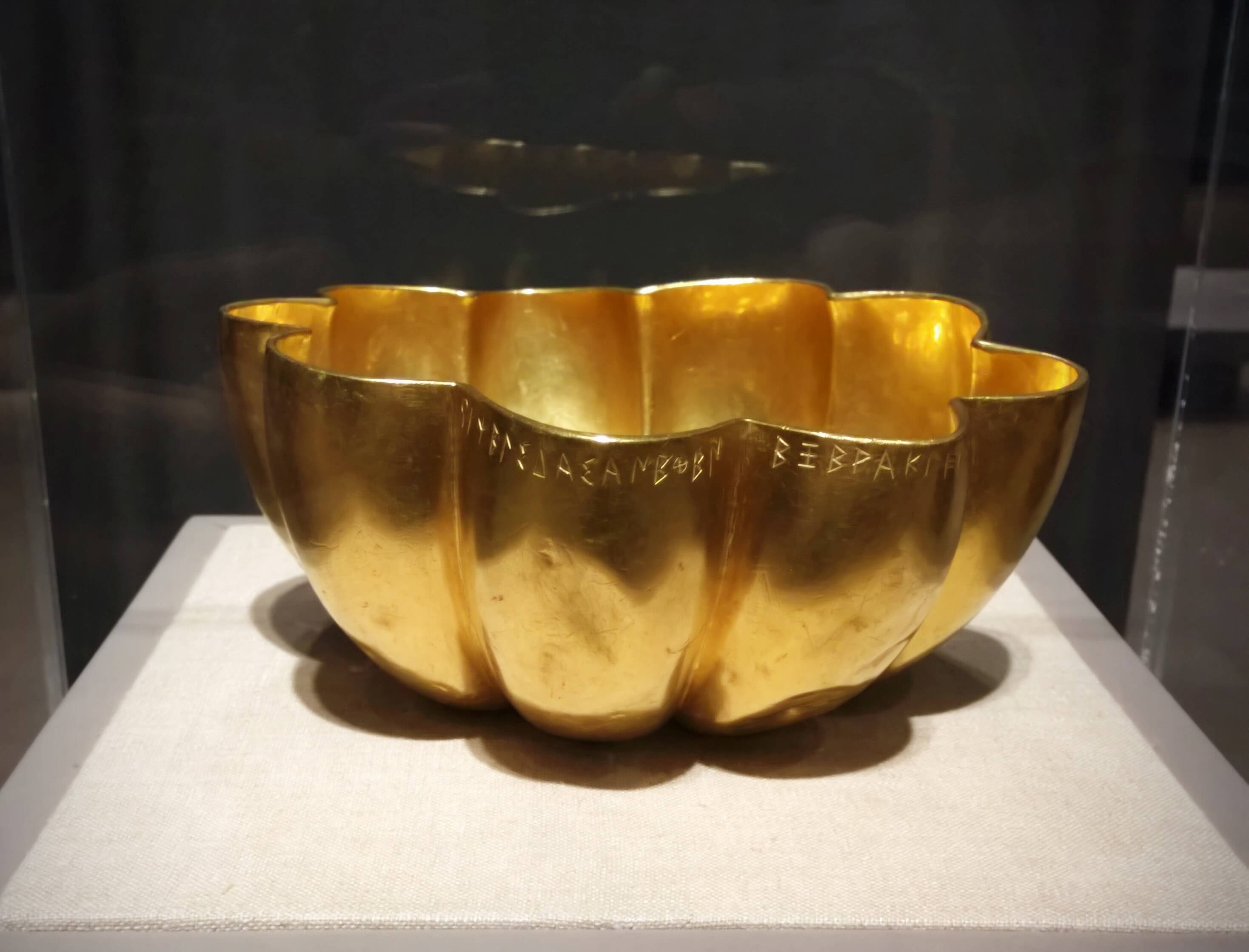 Libation bowl. Inscription: The sons of Kypselos dedicated [this bowl] from Heraclea. Greek, said to have been found at Olympia. Archaic period, 7th century BC. Gold. This bowl is an example of an extremely valuable offering made at Olympia. According to the inscription, it was dedicated by the ruling family of Corinth. Most precious offerings of this kind were later looted. Greek Archaic Gallery (Gallery 113). 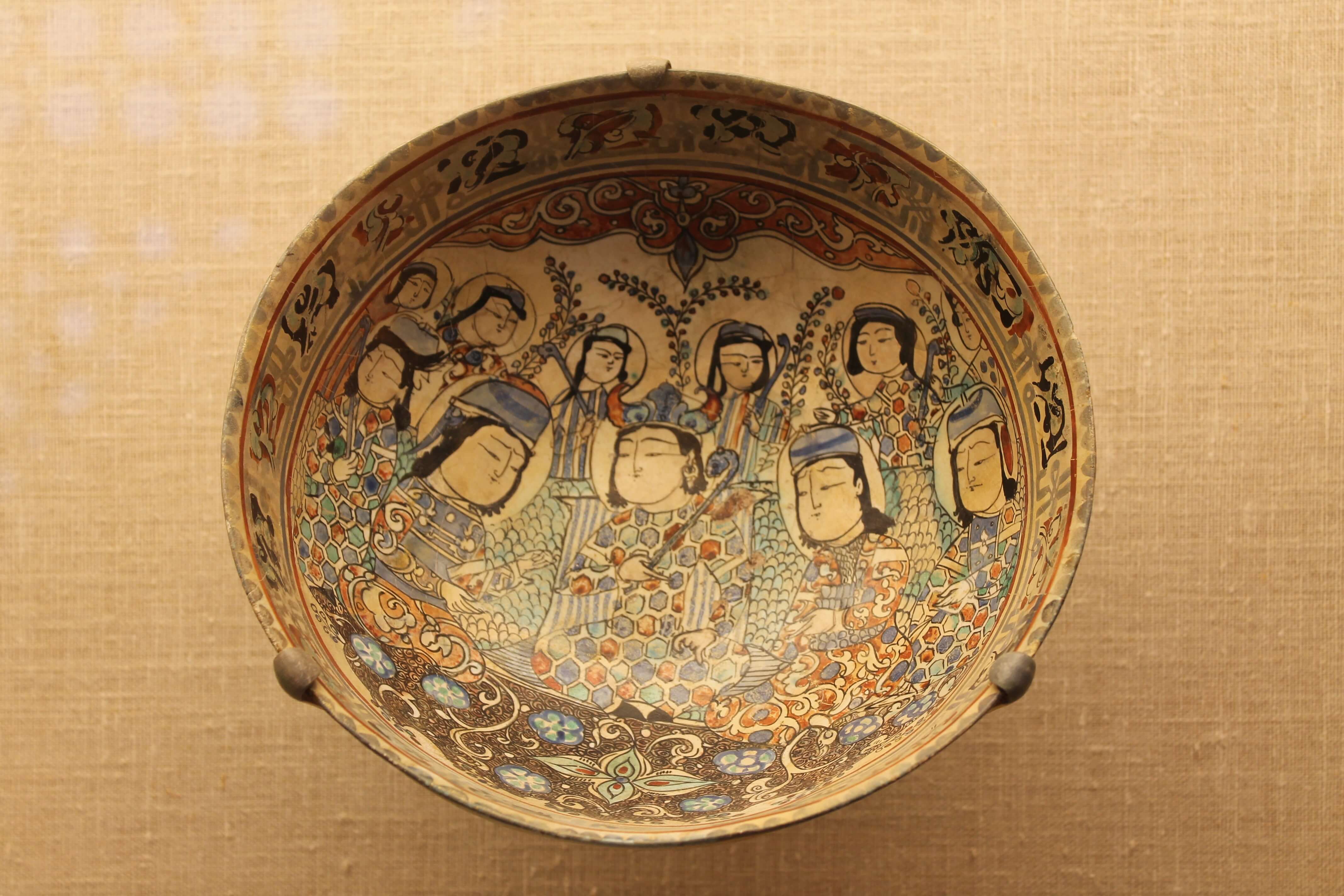 Bowl. Iran (Kashan), late 12th-early 13th centuries. Stonepaste body; overglaze decoration. The most common form of enameled ceramic is a bowl decorated with figures in the center. The figures are often grouped in scenes showing hunting, enthronements and lovers. This one appears to depict the hero Feridun (who carries an ox-headed mace) surrounded by his court. Islamic Gallery (Gallery 175). 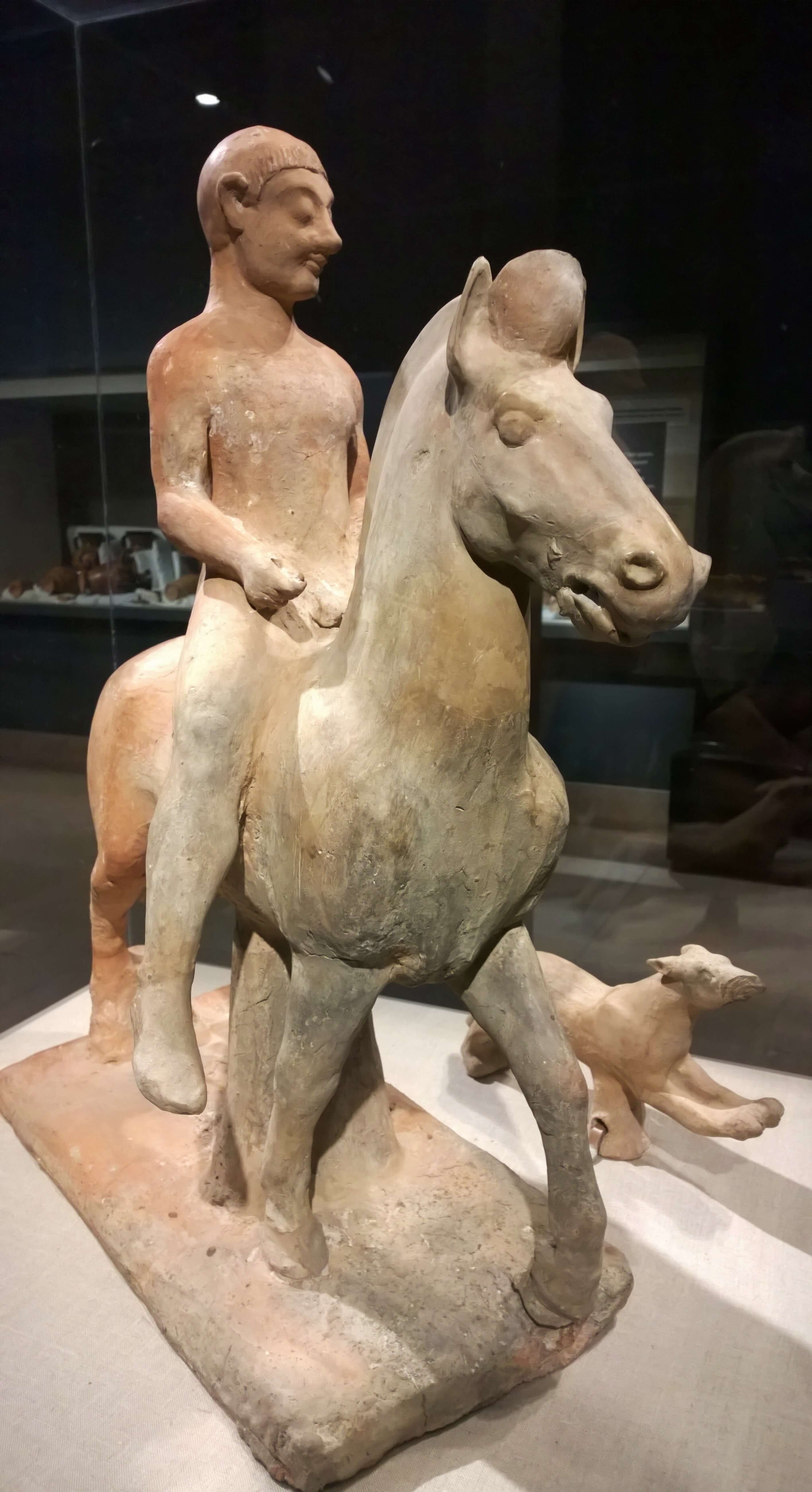 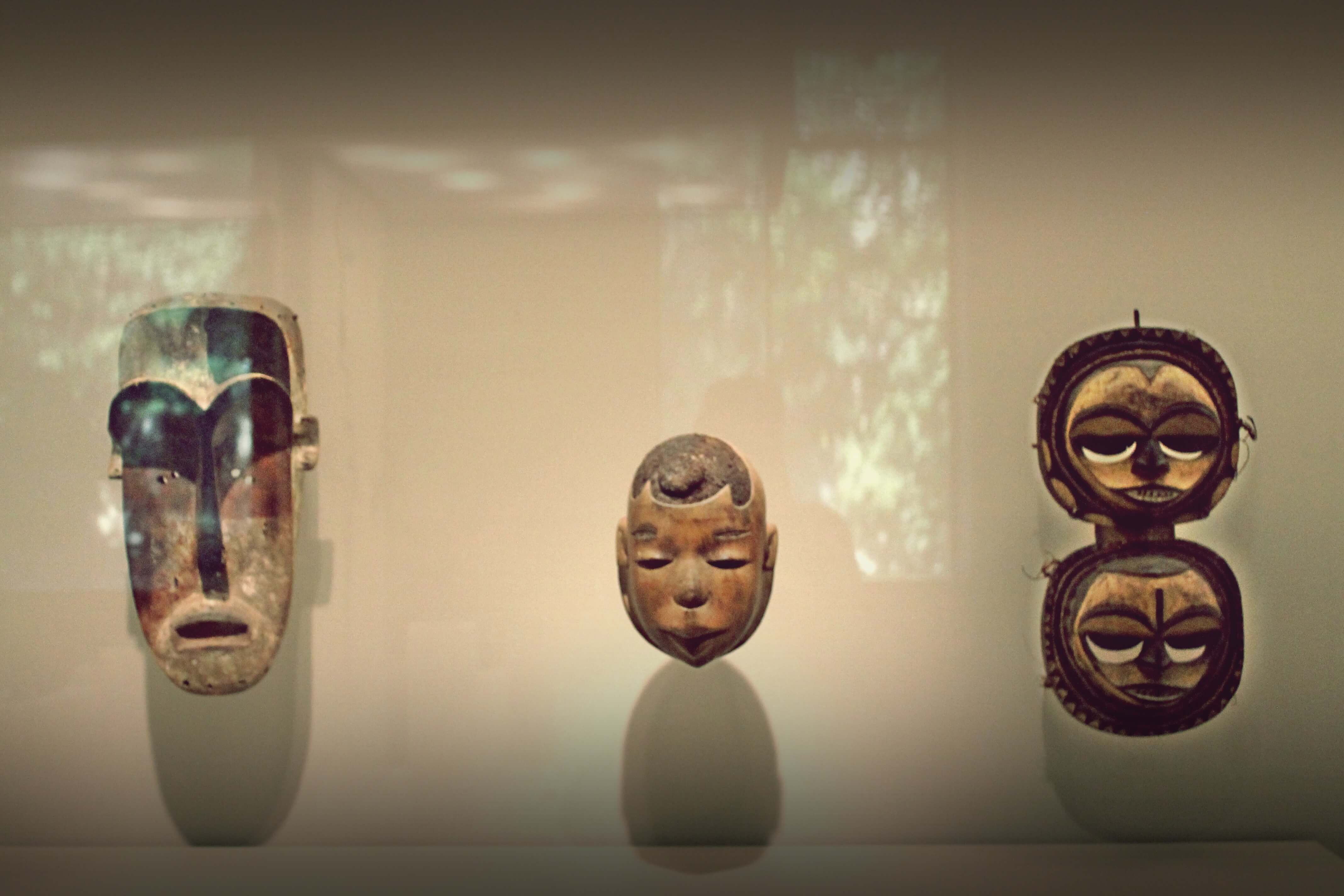 [From left to right] •Mask (bikeghe). Fang peoples. Gabon, 20th century. Wood, pigment. Masks such as this one were part of Fang rituals initiating young men into adulthood and also appeared on other ceremonial occasions —the community called upon them for protection in times of crisis. •Helmet mask (lipiko). Makonde peoples, Tanzania or Mozambique, 20th century. Wood, hair, pigment. Mapiko (singular: lipiko) is the name for male helmet masks and female face masks worn during initiation festivals. This male mask of thin, lightweight wood has naturalistic features and eyebrows and coiffure inlaid with human hair. In performance the costumed dancer looked through the small mouth opening. Masquerade and figurative carving traditions are rare in eastern and southern Africa, the area where this mask comes from. •Double mask (enyi ima). Eket people, Nigeria, 19th-early 20th centuries. Wood, pigment. Members of the Ekong society, wearing enyi ima masks, appear at funerals and entertain during agricultural festivals and other celebrations. Studies by researchers suggest that the masks’ round shape may reference the moon, thought to be the creator goddess in Eket belief. Double masks such as this one are rare. Richard B. Carter Gallery (Gallery 171). 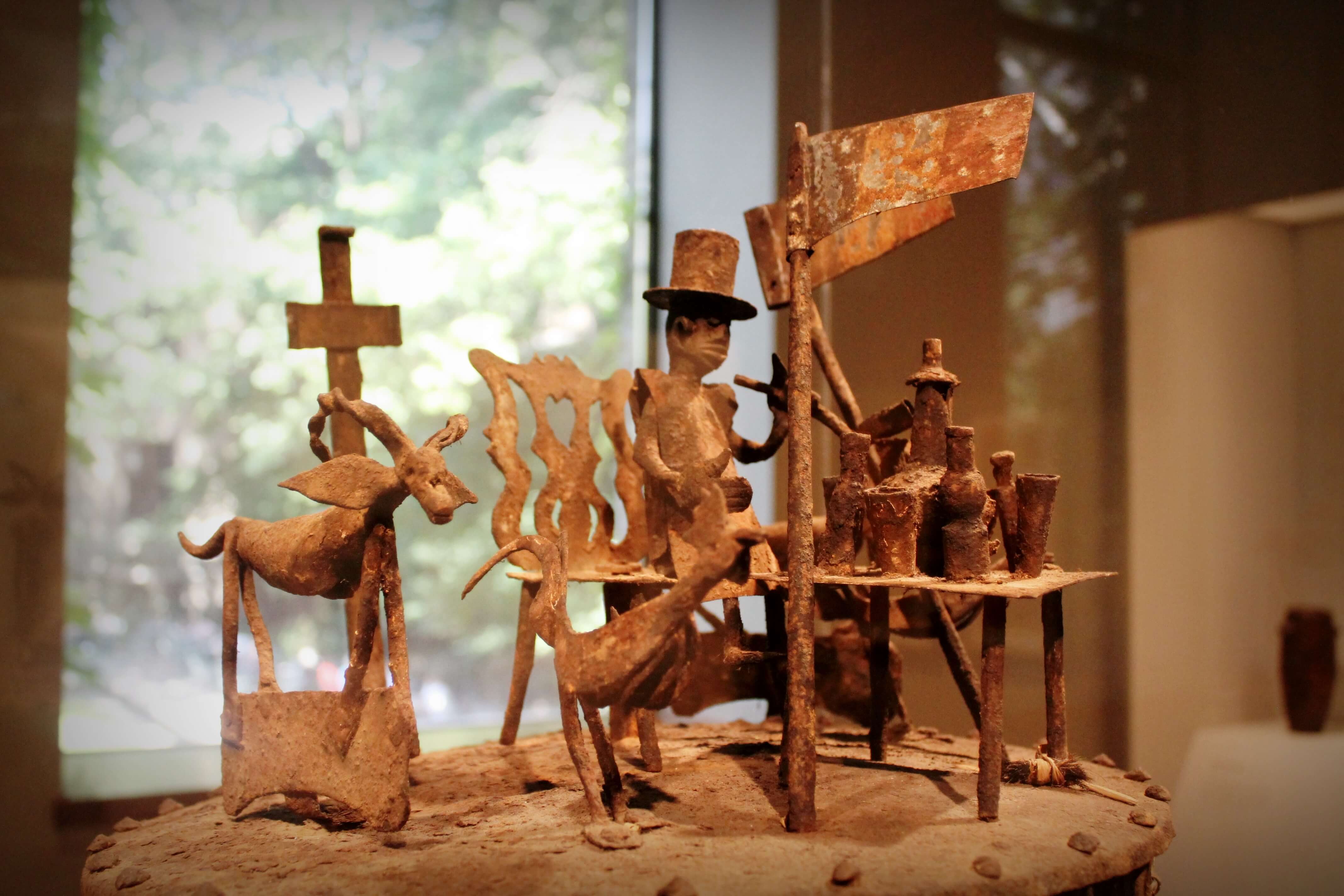 Altar (asen). Fon peoples, Republic of Benin, late 19th-early 20th centuries. Iron, pigment. Forged iron staffs, called altars, served as memorials to the dead family shrines. This work comes from Quidah, an important coastal trading town with close connections to Europe. The platform tableau consists of a central figure —a well-to-do gentleman with a European top hat and a pipe— seated on a Chippendale chair before a table arrayed with glass containers and flanked by sacrificial animals, flags and a cross. This altar attests to the linkages of the African coast with Europe and other parts of the world the creative adoption of foreign elements into the local visual repertoire. Richard B. Carter Gallery (Gallery 171). 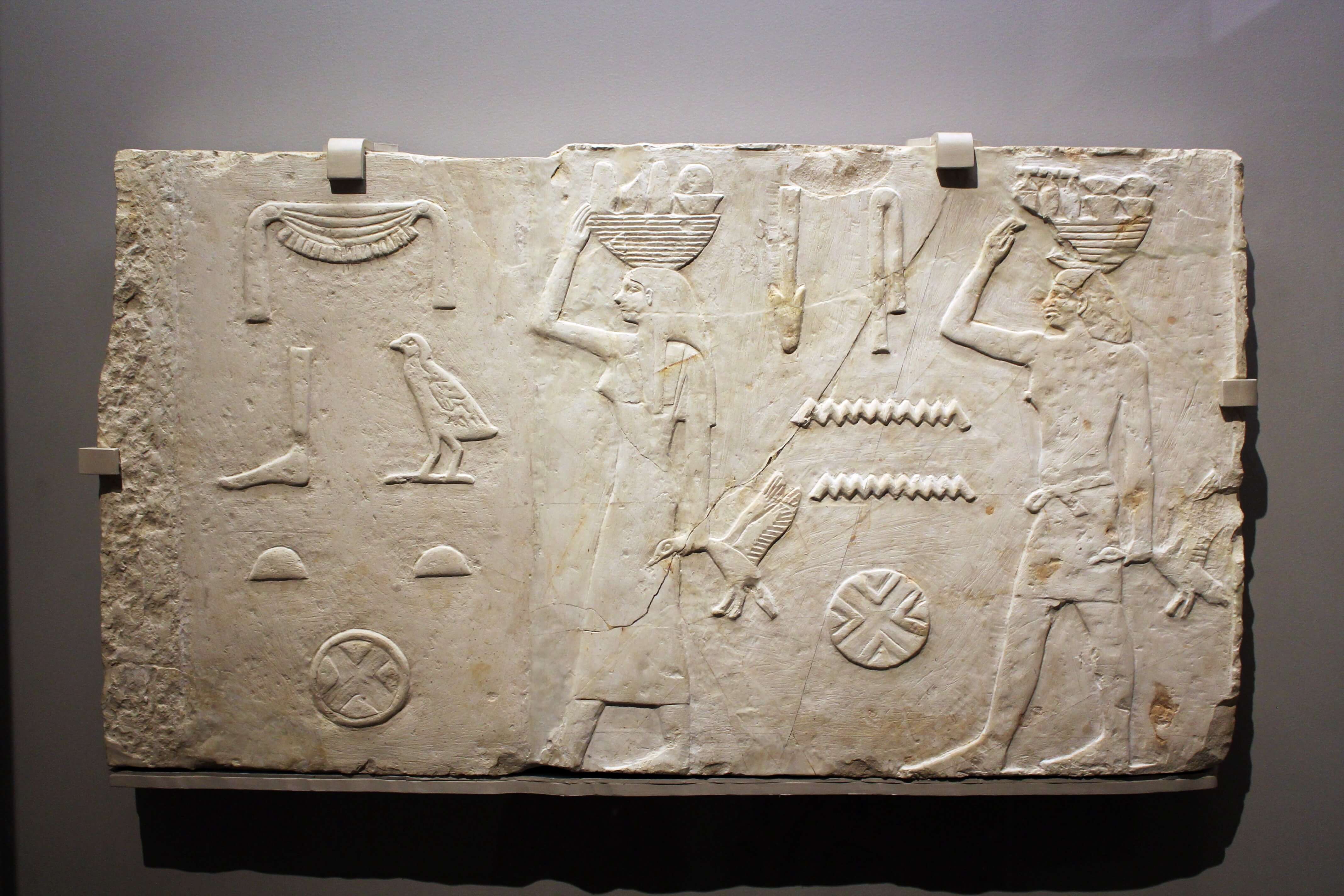 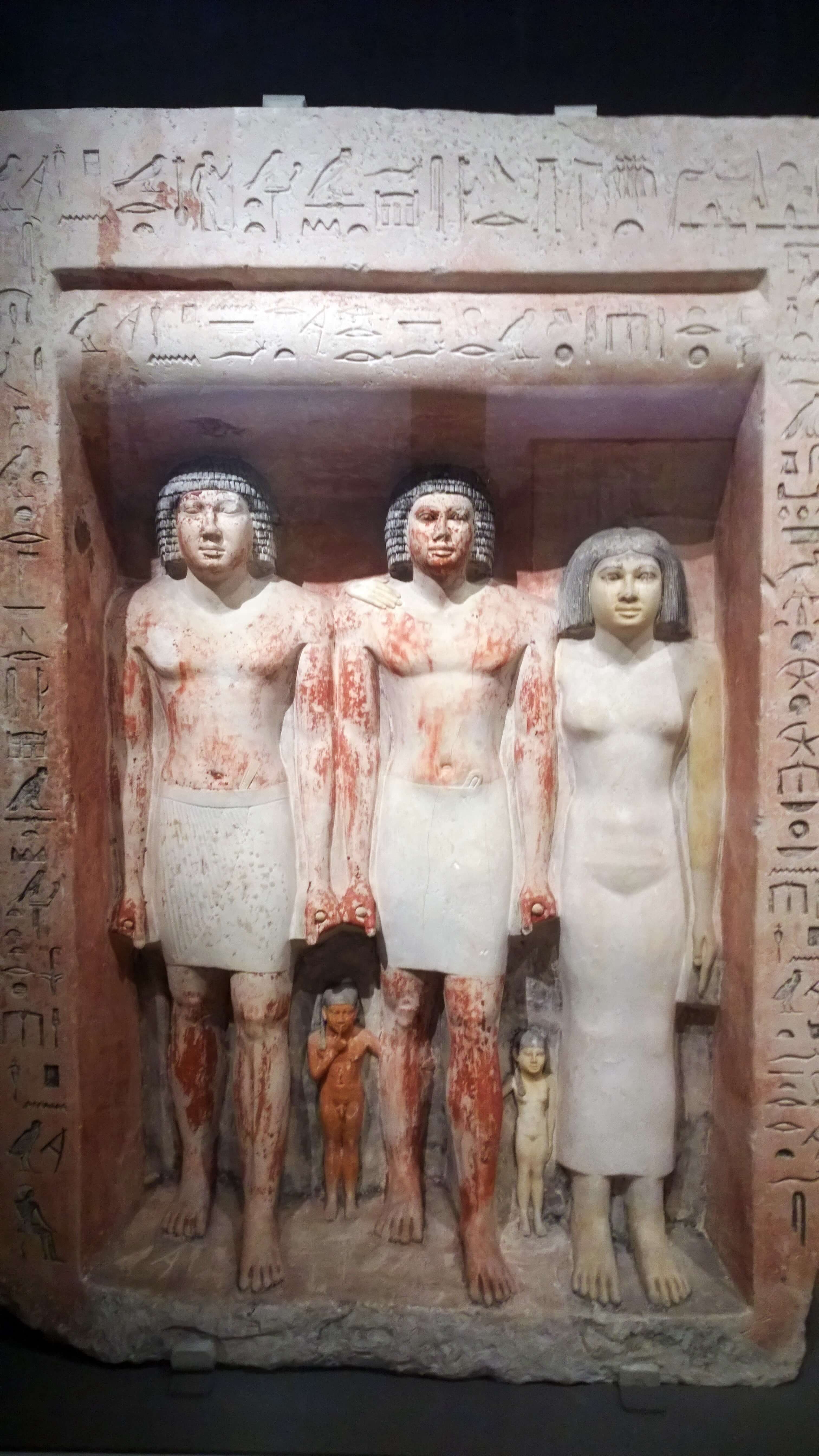 Beadnet dress, 2551–2528 BC. Depictions of women in Egyptian art occasionally feature garments decorated with an overall lozenge pattern. This design is believed to represent beadwork, which was either sewn onto a linen dress or worked into a separate net worn over the linen. This beadnet dress is the earliest surviving example of such a garment. It has been painstakingly reassembled from approximately seven thousand beads found in an undisturbed burial of a female contemporary of King Khufu. Although their string had disintegrated, a few beads still lay in their original pattern on and around the mummy, permitting an accurate reconstruction. The color of the beads has faded, but the beadnet was originally blue and blue green in imitation of lapis lazuli and turquoise. Egypt: Old Kingdom Funerary Arts Gallery (Gallery 105B). 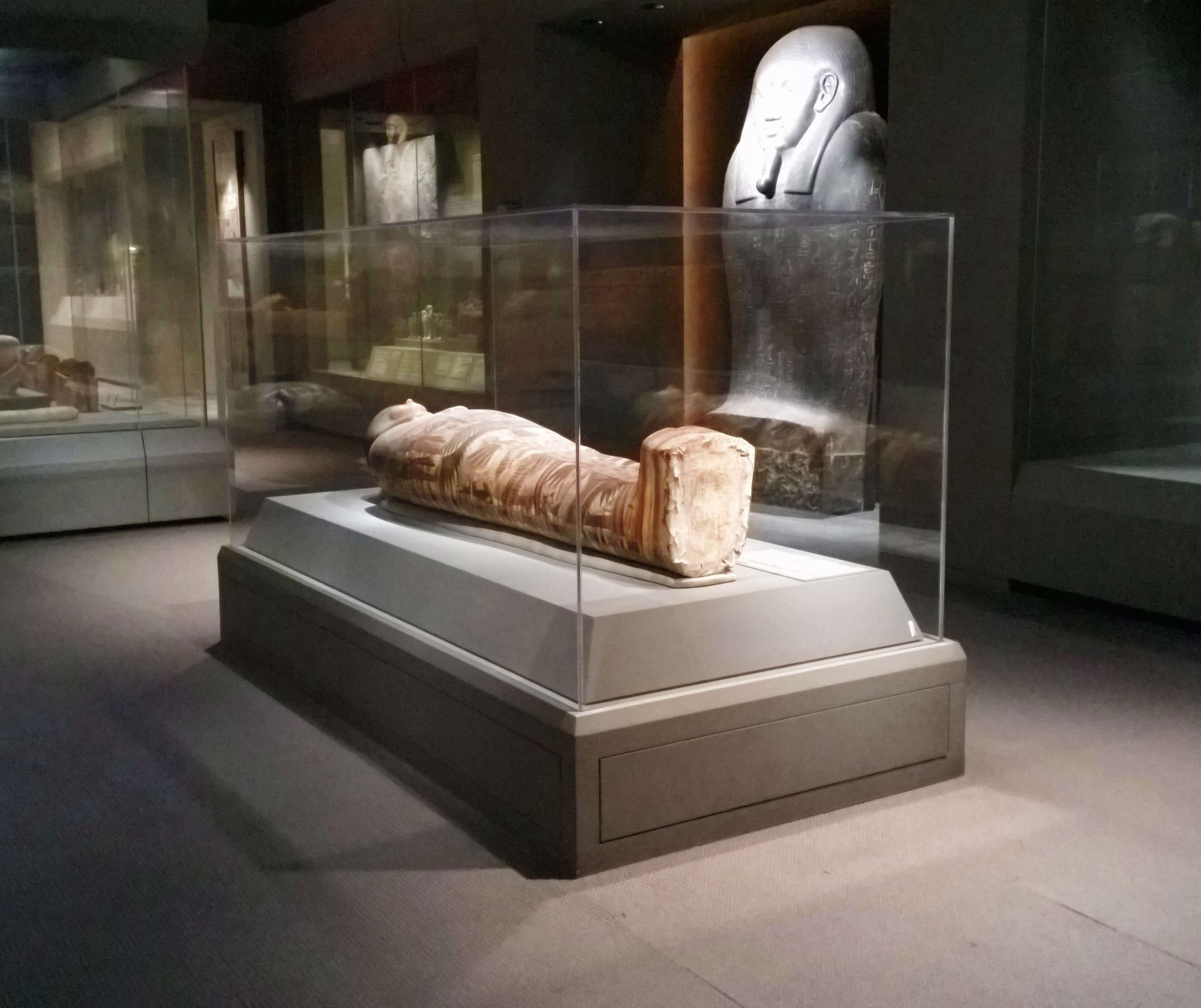 Oh, well… I kind of wanted to leave with that dress —and I couldn’t care less if it had been worn by a mummy!!