Sarcophagus and Lid with husband and wife. Italy (Etruria), late classical or early Hellenistic period, 350-300 BC. From the tomb of the Tetnies family in present-day Vulci. Travertine. Greek Archaic Gallery (Gallery 113).

To get the shot below I stood as close to the pedestal as possible, leaned over the sarcophagus as much as I could without touching it, lifted my camera up in one hand and tried to get it as closer above the heads as possible! Sure enough… I triggered the laser alarm!! Then I looked pretty much like Mr. Bean when he knows he’s in trouble, started fidgeting and expected an angry guard to storm into the gallery… M. pretended he didn’t know me and I’m pretty sure, had I been reprimanded in anyway he would deny having any relationship with me whatsoever! Punishment never came though and I figured I was being watched acting goofy but meaning-no-harm through the camera security system and left alone to die of sheer embarrassment in front of peer-visitors who witnessed the scene…  It’s not even a decent shot, for crying out loud!! 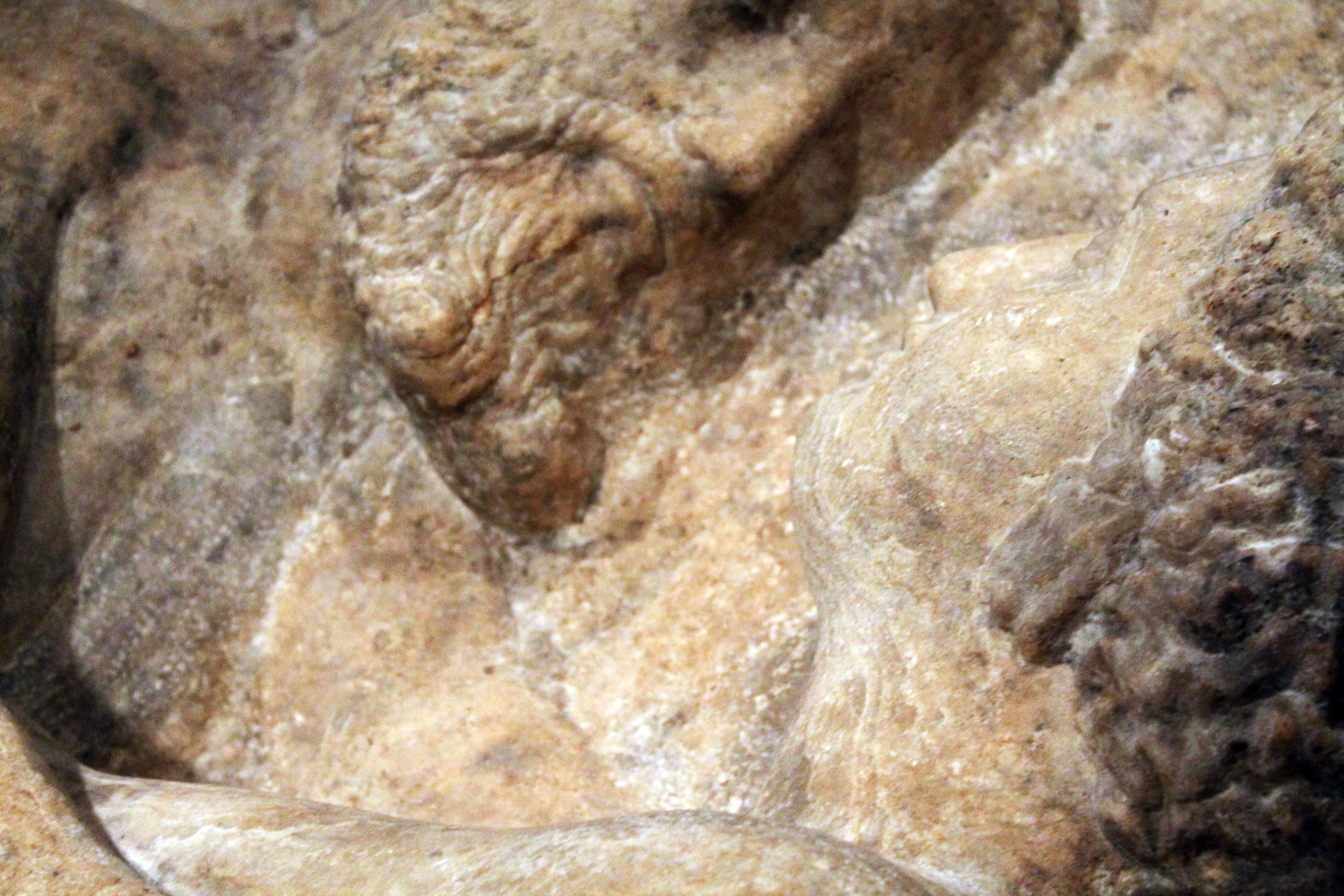 After that little incident was over we proceeded to the next gallery and I got to admire this impressive lady: 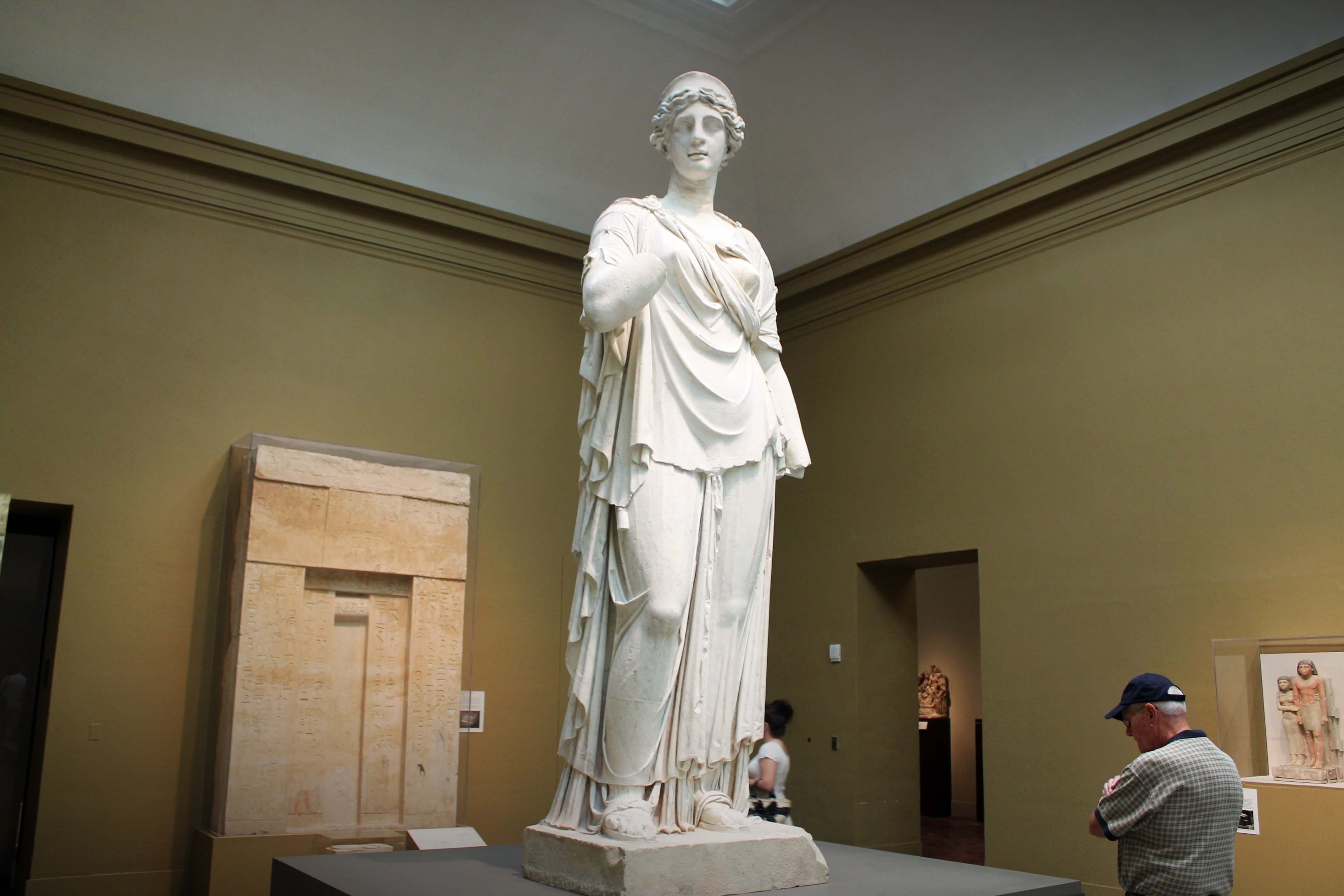 Juno [the Roman equivalent of Hera]. This Roman marble lady is the largest Classical sculpture in any museum in the United States —standing 13 feet tall and weighing in at 13,000 pounds. She was acquired by the MFA from the Brookline estate of the Brandegee family (known as Faulkner farm), where she had been the major ornament of a famous Italianate garden for over 100 years. George D. and Margo Behrakis Gallery (Gallery 207).

Τhen,  on to more galleries we ventured… 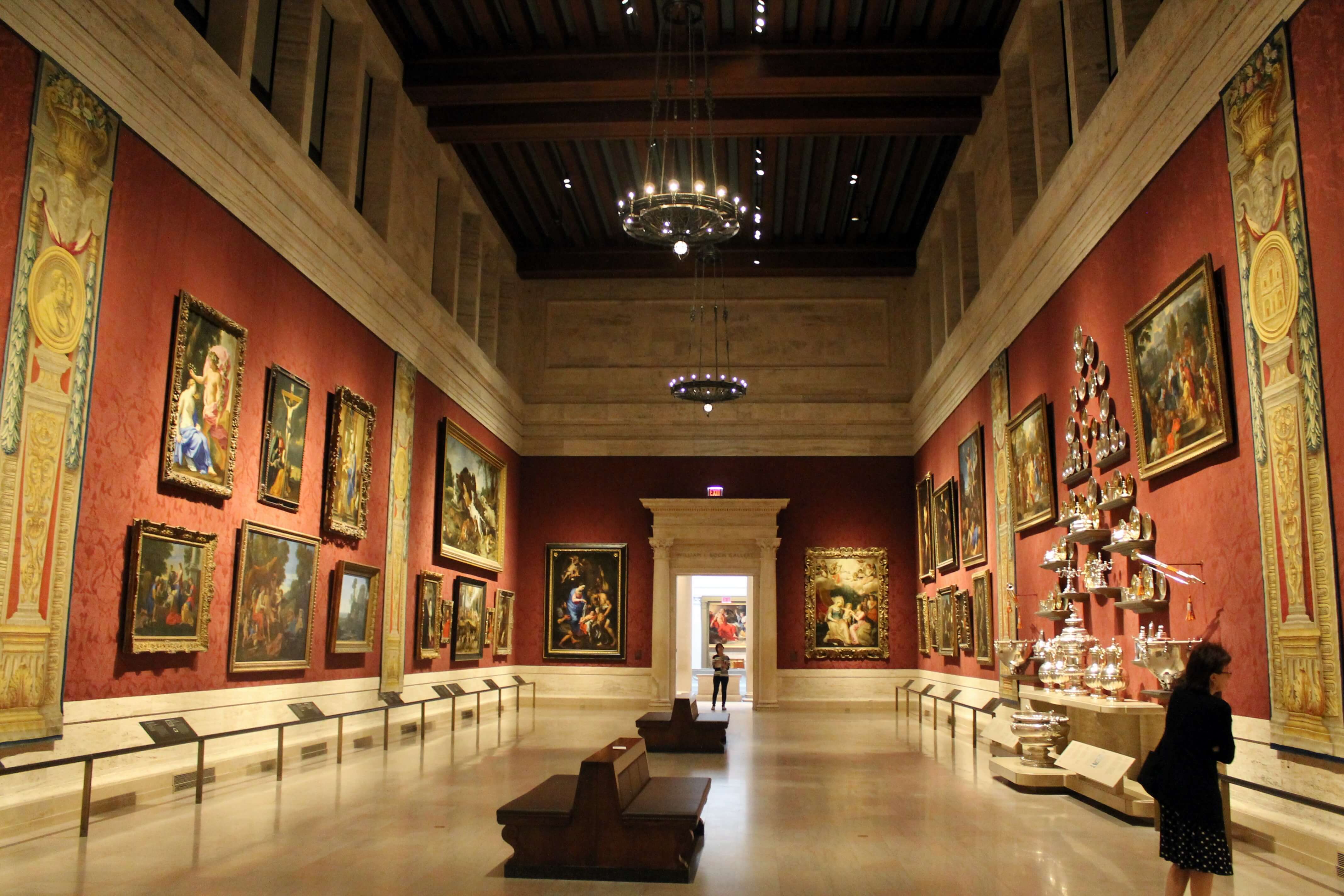 The William I. Koch Gallery (Gallery 250) with European Painting 1550–1700 and Hanoverian Silver. 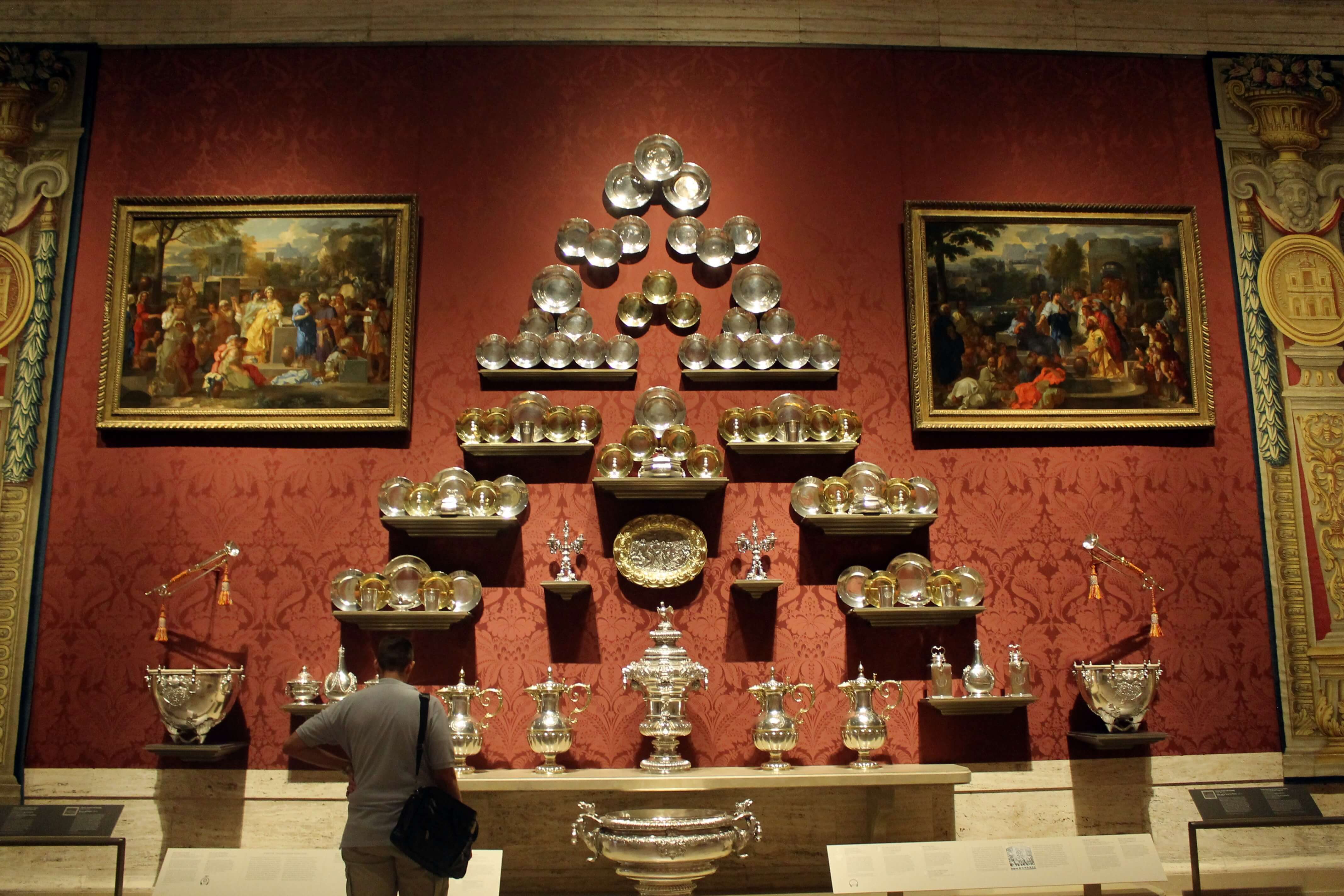 A handsome pair of silver Baroque trumpets used in royal ceremonies for the German House of Hanover join the Museum’s celebrated collection of Hanoverian silver. 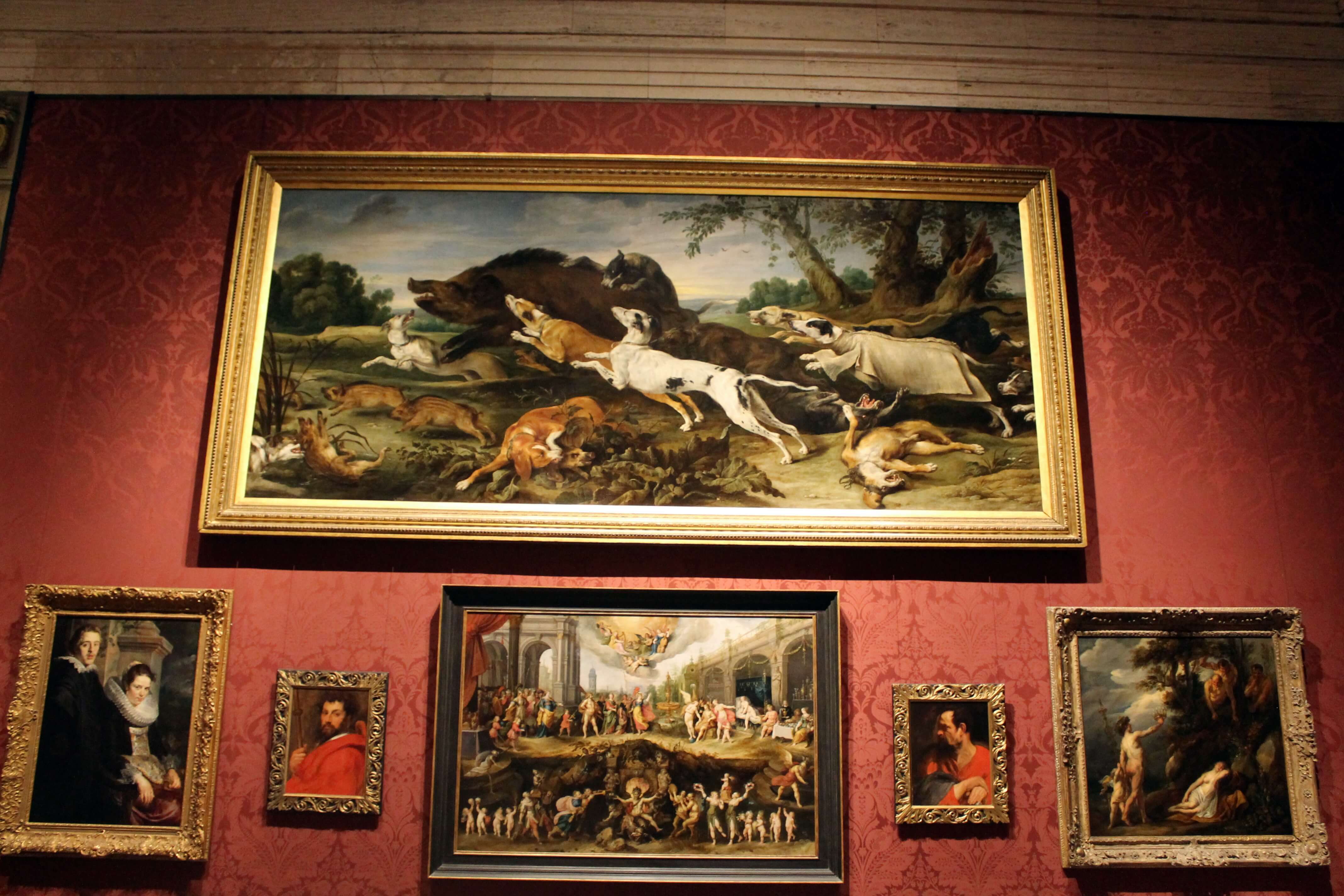 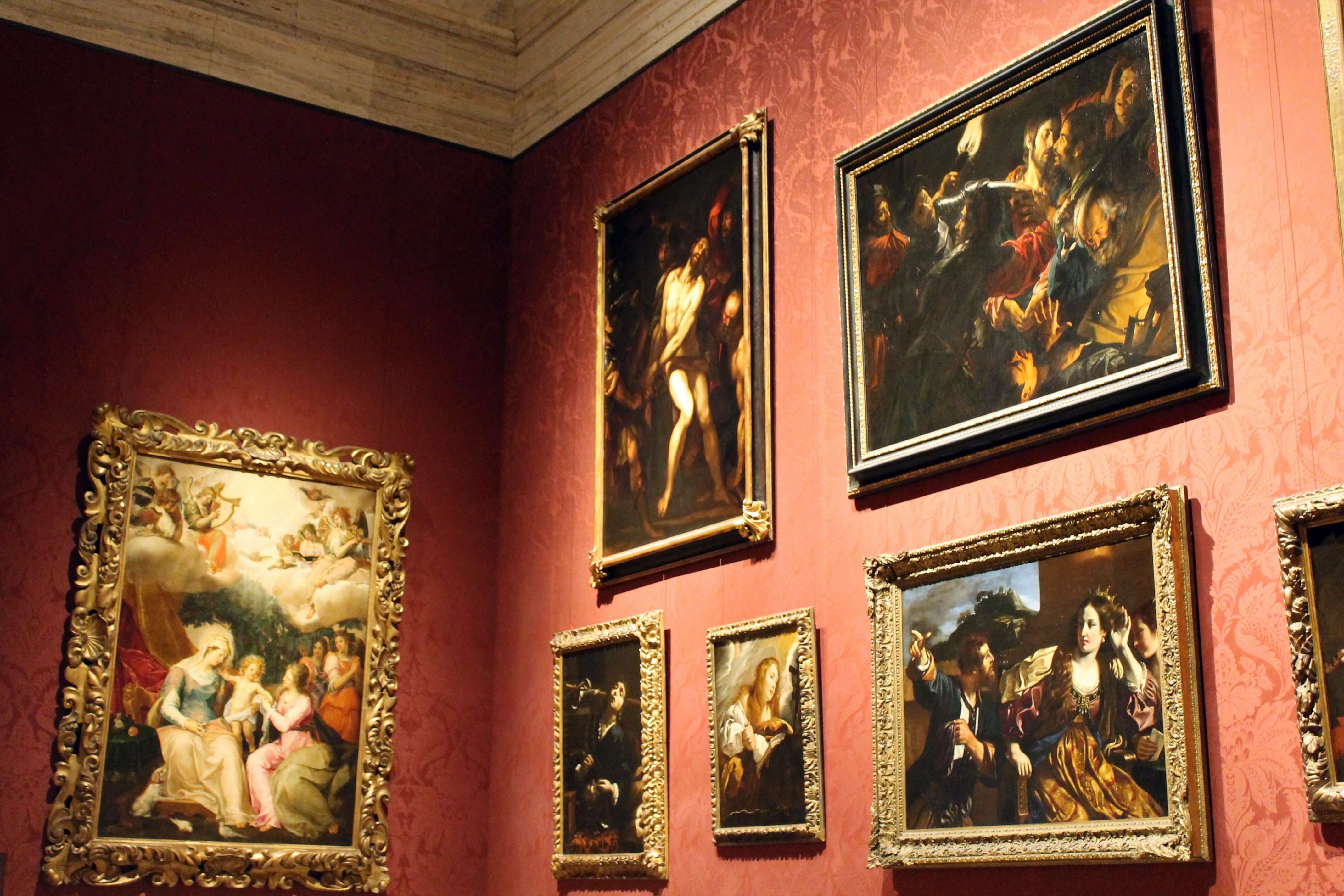 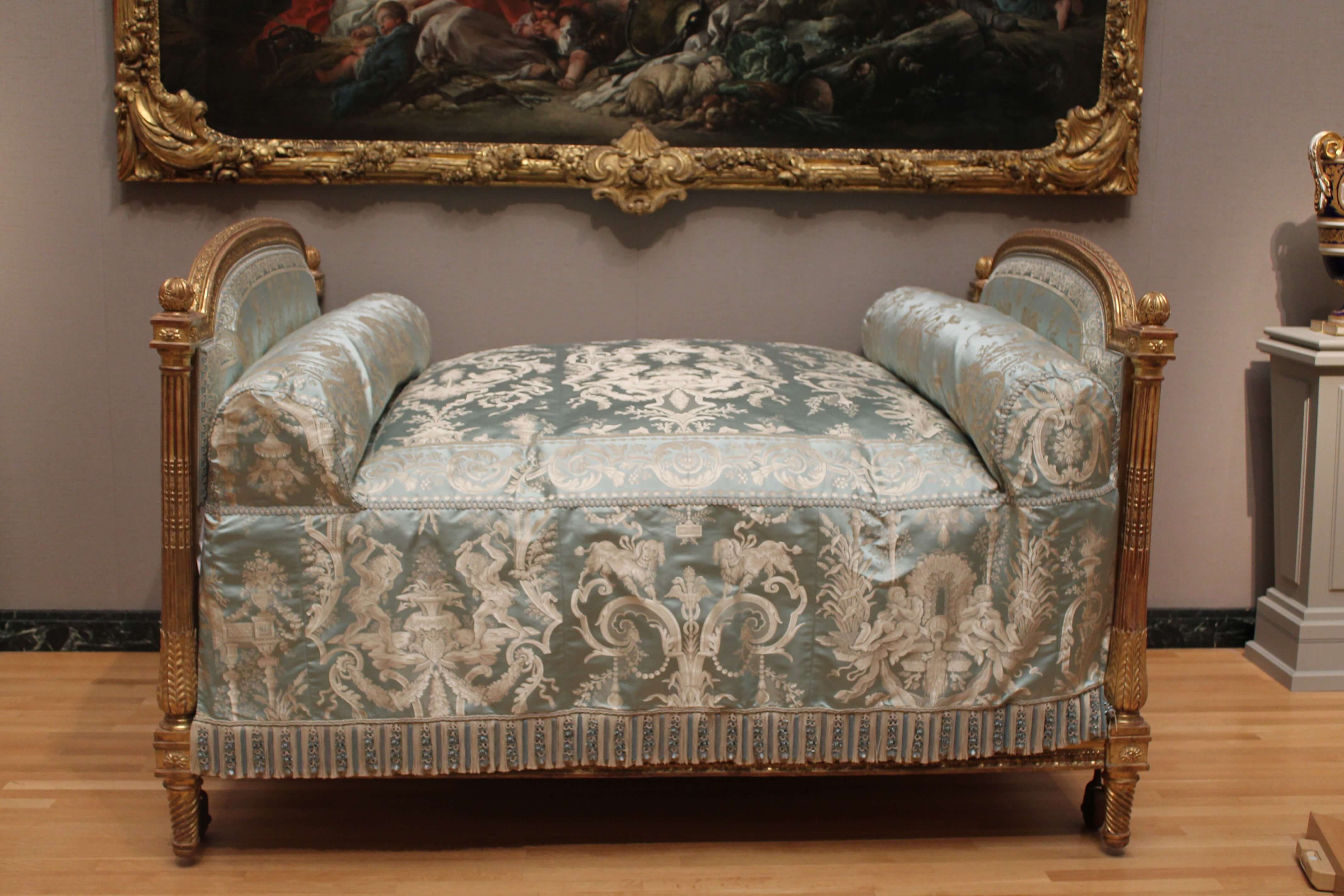 Alcove Bed (lit en niche). France (Paris), 1787. Stamped by Jean-Baptiste-Claude Sené (French), 1747-1803. Gilded beech-wood; modern upholstery. In 18th century France beds ranged from practical cots to extravagant fantasies. This bed was designed to stand lengthwise against the bedroom wall and was set into an alcove curtained off of the room, for privacy. The metal wheels facilitated the easy removal of the bed from its alcove in order to change the linens.  The silk textiles and trimmings ordered for the bed and the alcove represented the greatest expense in the interior decoration of the room. The 18th century upholsterer used a luxurious three-coloured silk to cover the bed, line the walls in the alcove and make the bed curtains; the silk and trims have been exactly reproduced. Ann and William Elfers Gallery (Gallery 245). 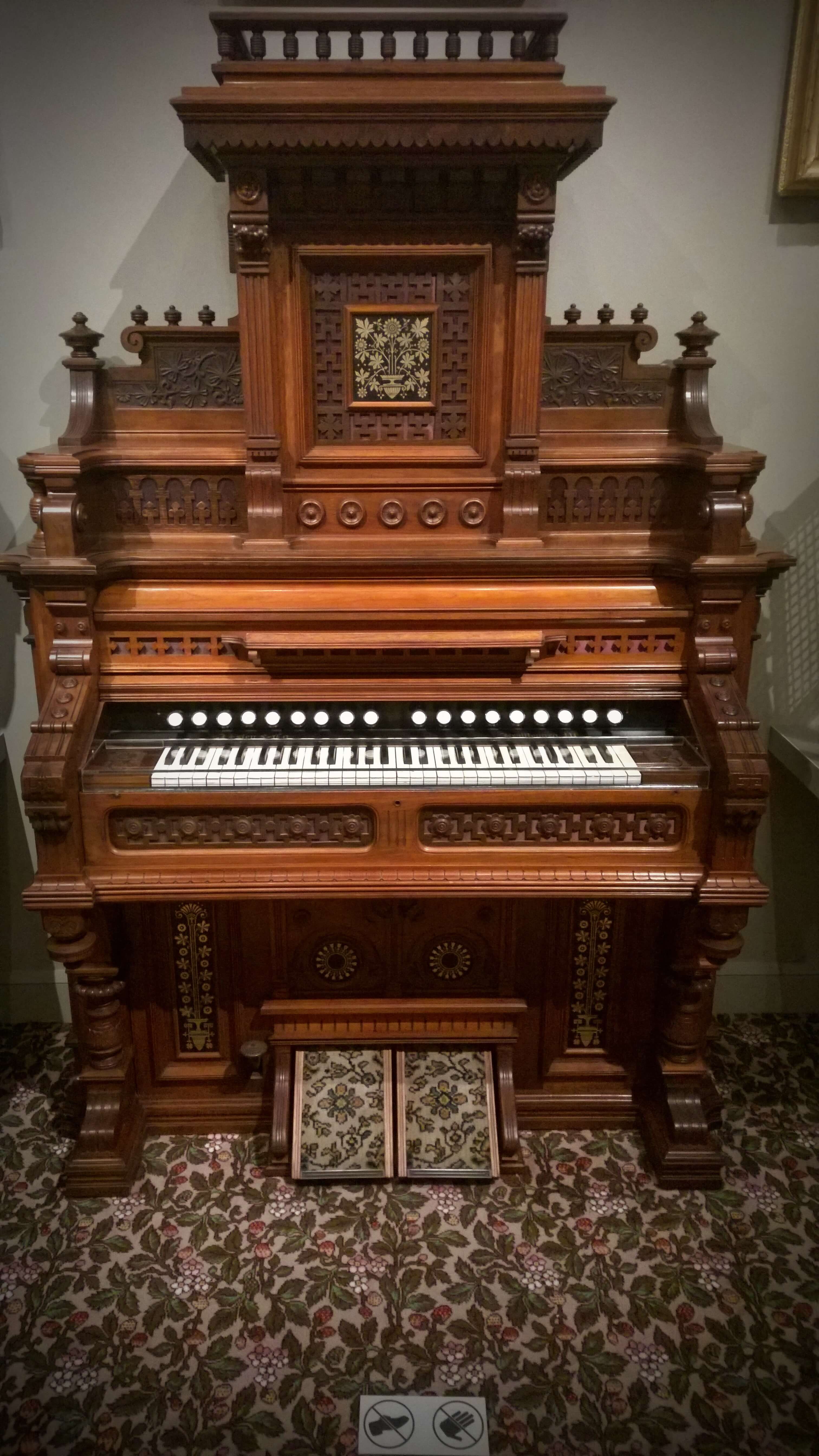 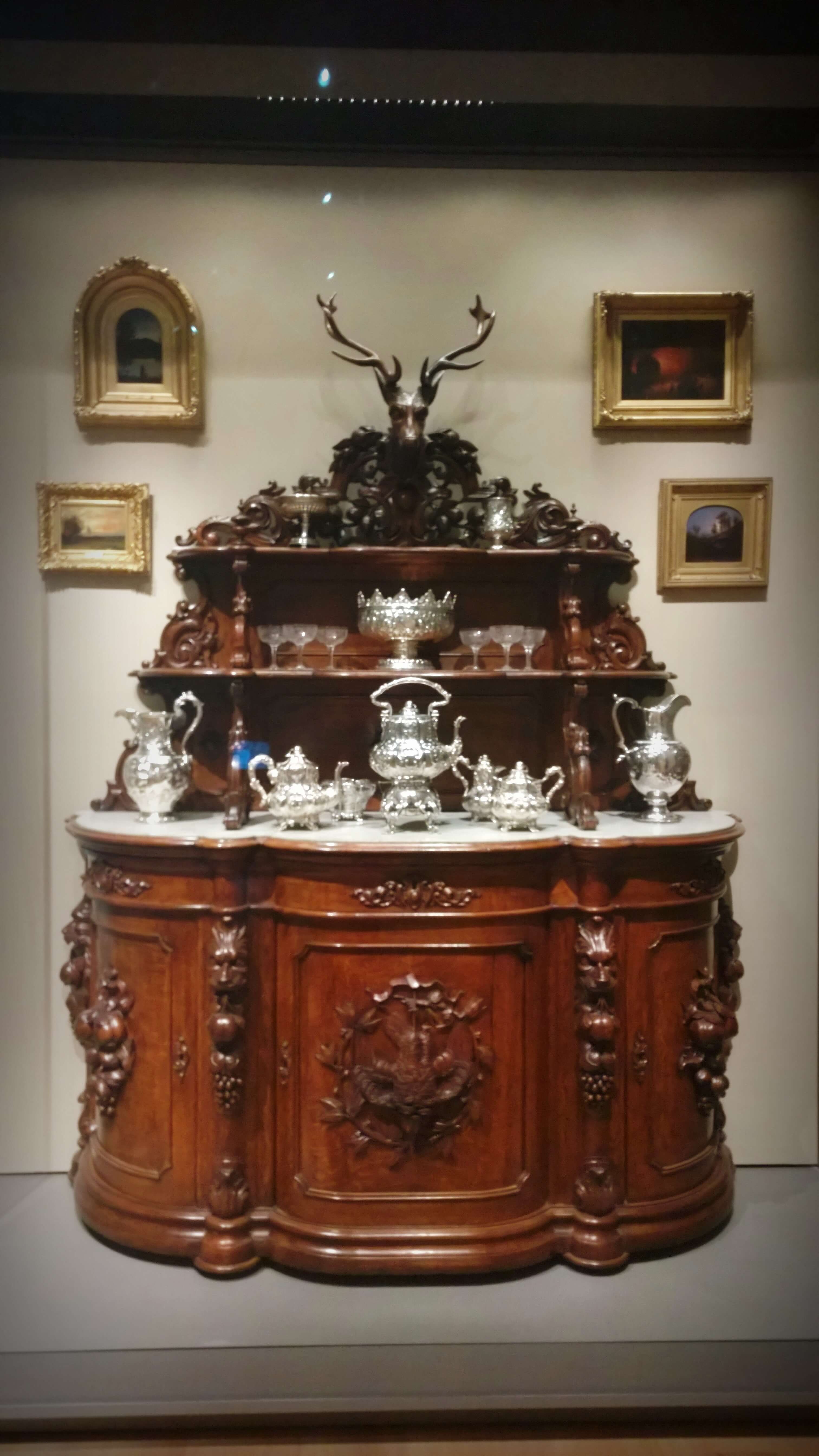 Sideboard, 1850–60. Ignatius Lutz, American (born in France), 1817–1860. Oak, yellow-poplar, marble. Sideboards trace their form, function, and iconography to noble homes in Europe, where such pieces had been in use since the fifteenth century. Ignatius Lutz was one of several French-trained cabinetmakers who dominated the high-end furniture trade in America, bringing European styles and craftsmanship to a wealthy and fashionable clientele. Lutz’s shop, employing thirty craftsmen, was among the largest in Philadelphia and relied upon handwork rather than power machinery to produce masterpieces such as this sideboard. Forkner and Gill Family Gallery (Gallery 238). 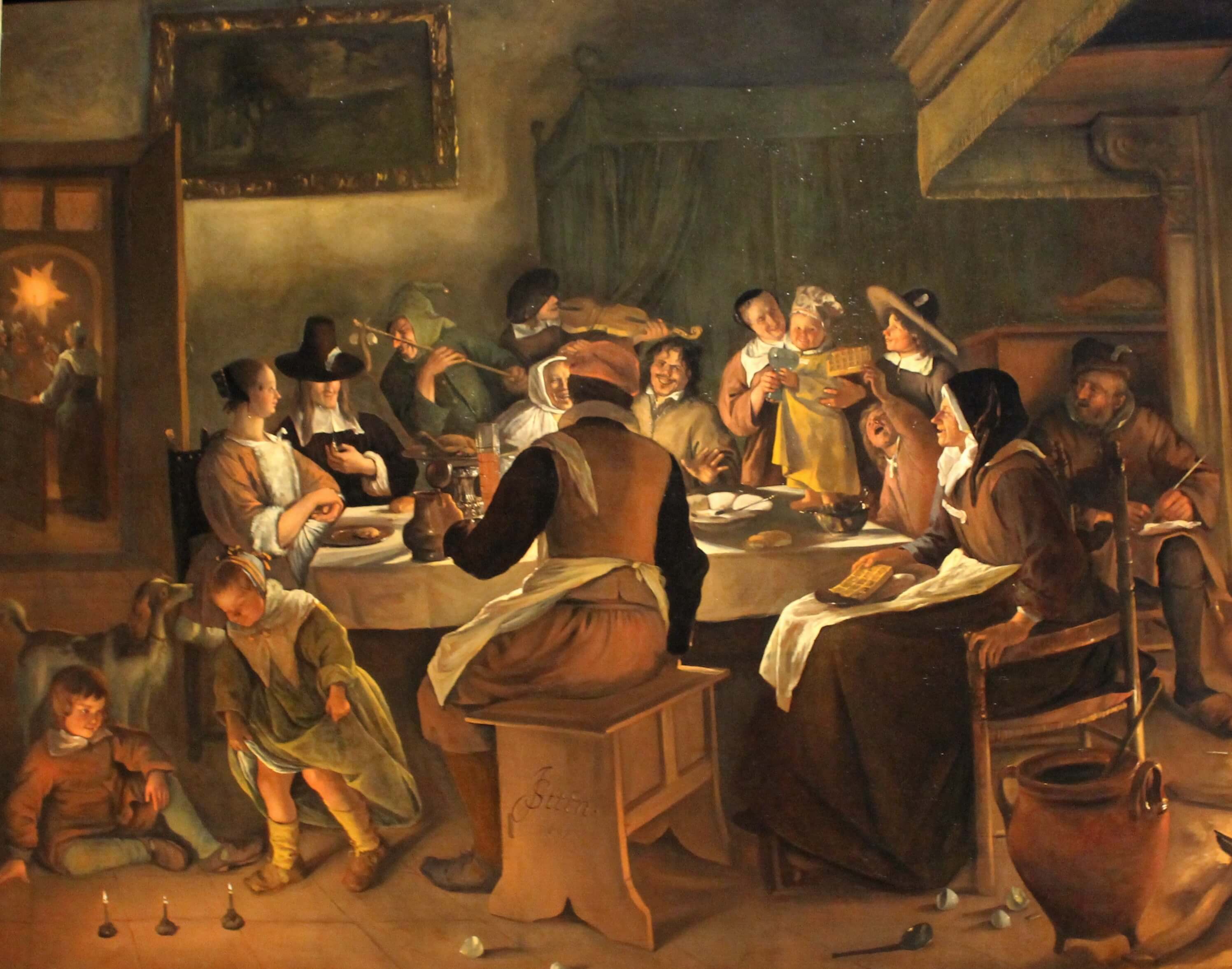 Jan Havicksz. Steen. Dutch, 1626-1679. Twelfth Night Feast, 1662. Oil on canvas. Twelfth night is observed in early January, marking the end of Christmas season and beginning of Epiphany. It celebrates the arrival (twelve days after Christ’s birth) of the three Kings, led by a star to the newborn Jesus. Here Steen depicts the jovial atmosphere pf a prosperous Dutch family’s celebrations. Notice the painting’s many details: egg shells litter the floor where children play with candles symbolic of the Kings, while at the table, adults carouse as a boy offers the little “king” a bite off his holiday waffle. Art of the Netherlands in the 17th Century Gallery (Gallery 242). 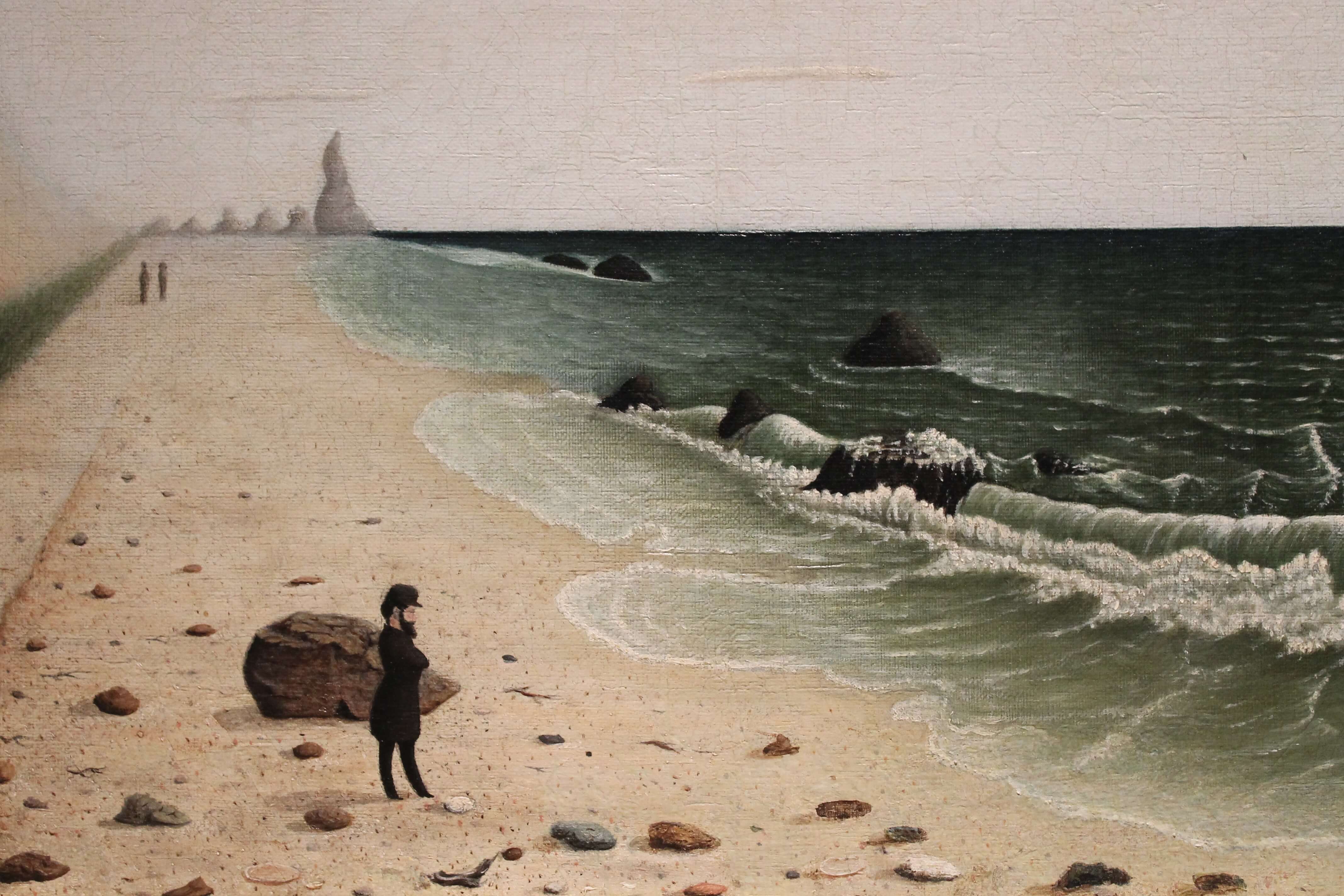 Meditation by the Sea, early 1860s. Unidentified artist. Oil on canvas. The painter of this moody image based the composition on a printed view of Gay Head, on Martha’s Vineyard. The printed image is relatively bland, but the painting is charged with emotion. The rocks along the horizon, the stylized waves and the barren branches create a disquieting mood, which may reflect the country’s anxiety during the Civil War. Joyce and Edward Linde Gallery (Gallery 237). 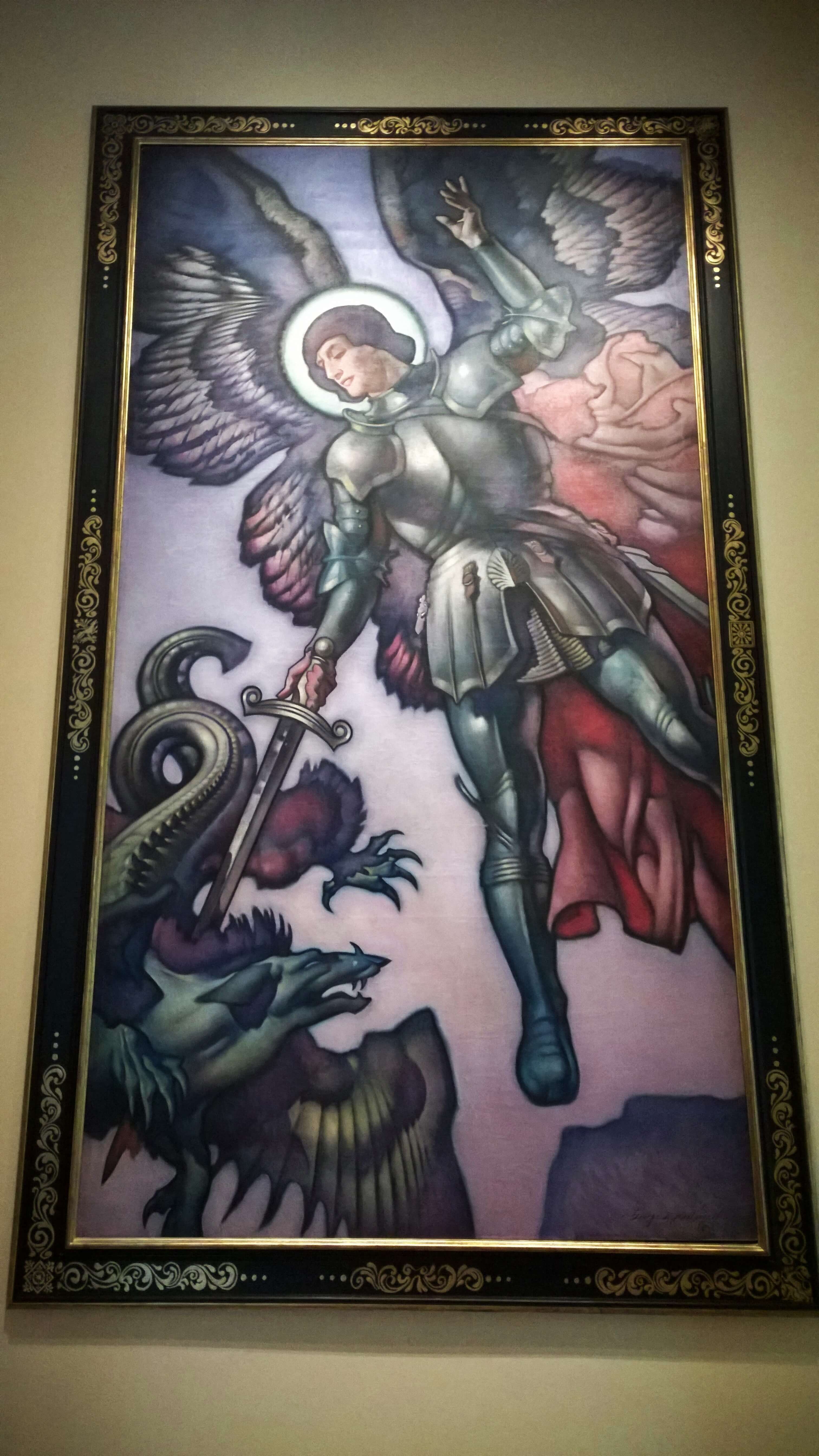 George Hawley Hallowell. American, 1871-1926. Saint Michael Slaying the Dragon, 1925. Oil on canvas. Hallowell painted this for a wall over a large organ at the Boston City Club. The ensemble was dedicated to the memory of club members who had perished in World War I. Hallowell worked as an illustrator, a muralist and a painter; he also designed books, posters and stained glass. Lorraine and Alan Bressler Gallery (Gallery 222). 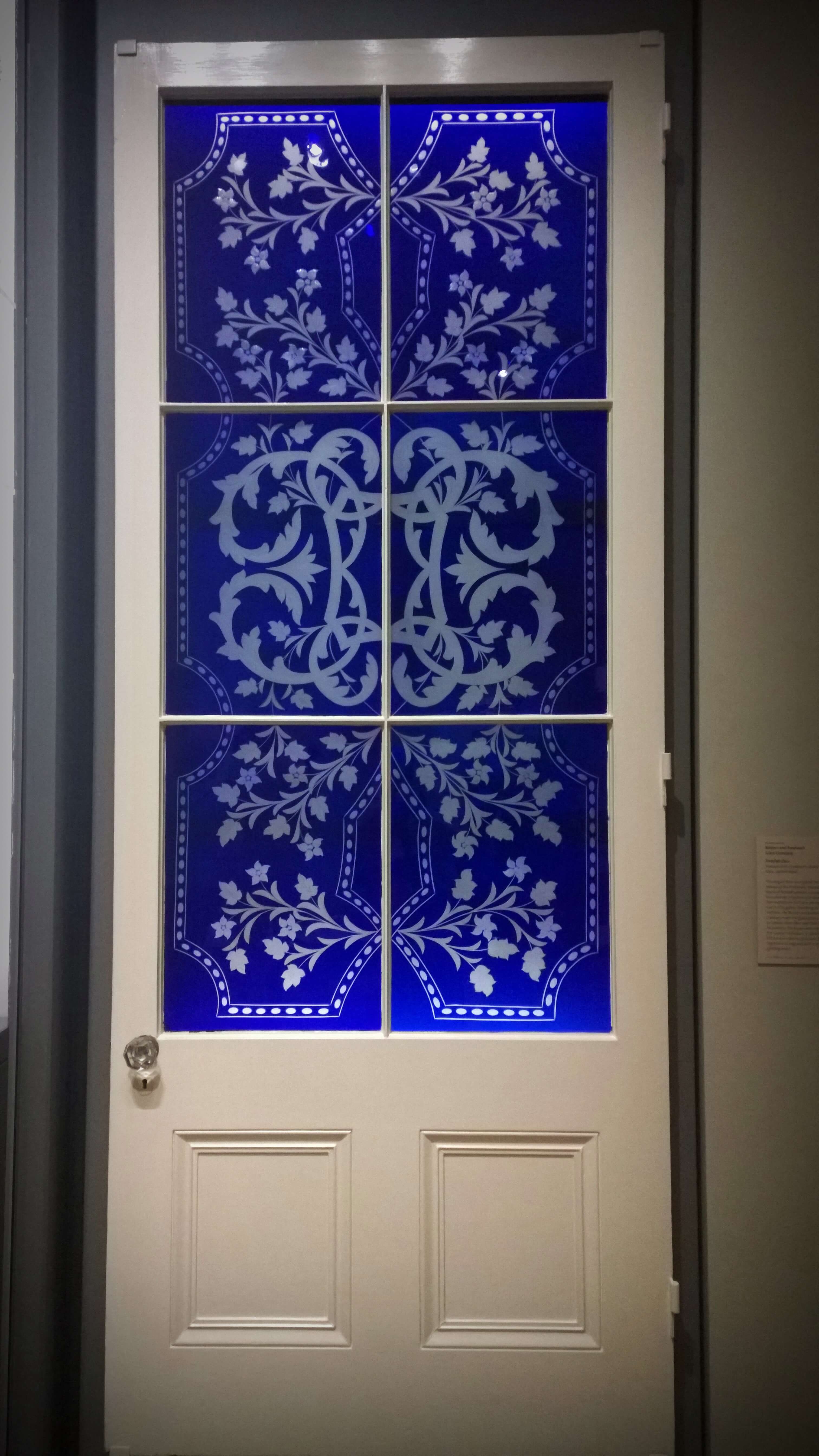 Probably made by Boston and Sandwich Glass Company. Paneled door. Massachusetts (Sandwich), about 1845-60. Glass, painted wood. This elegant door, once graced the central hallway of the Dorchester, Massachusetts house of Roswell Gleason, a prosperous manufacturer of pewter and silverplate. According to family tradition, the Boston and Sandwich Glass Company made the glass panels as a tribute to Gleason, who often used their glass in his products. The panels were made using the “overlay” technique, in which sheets of blue and colourless glass were fused together and engraved with a rotating grinding wheel. David and Stacey Goel Gallery (Gallery 239). 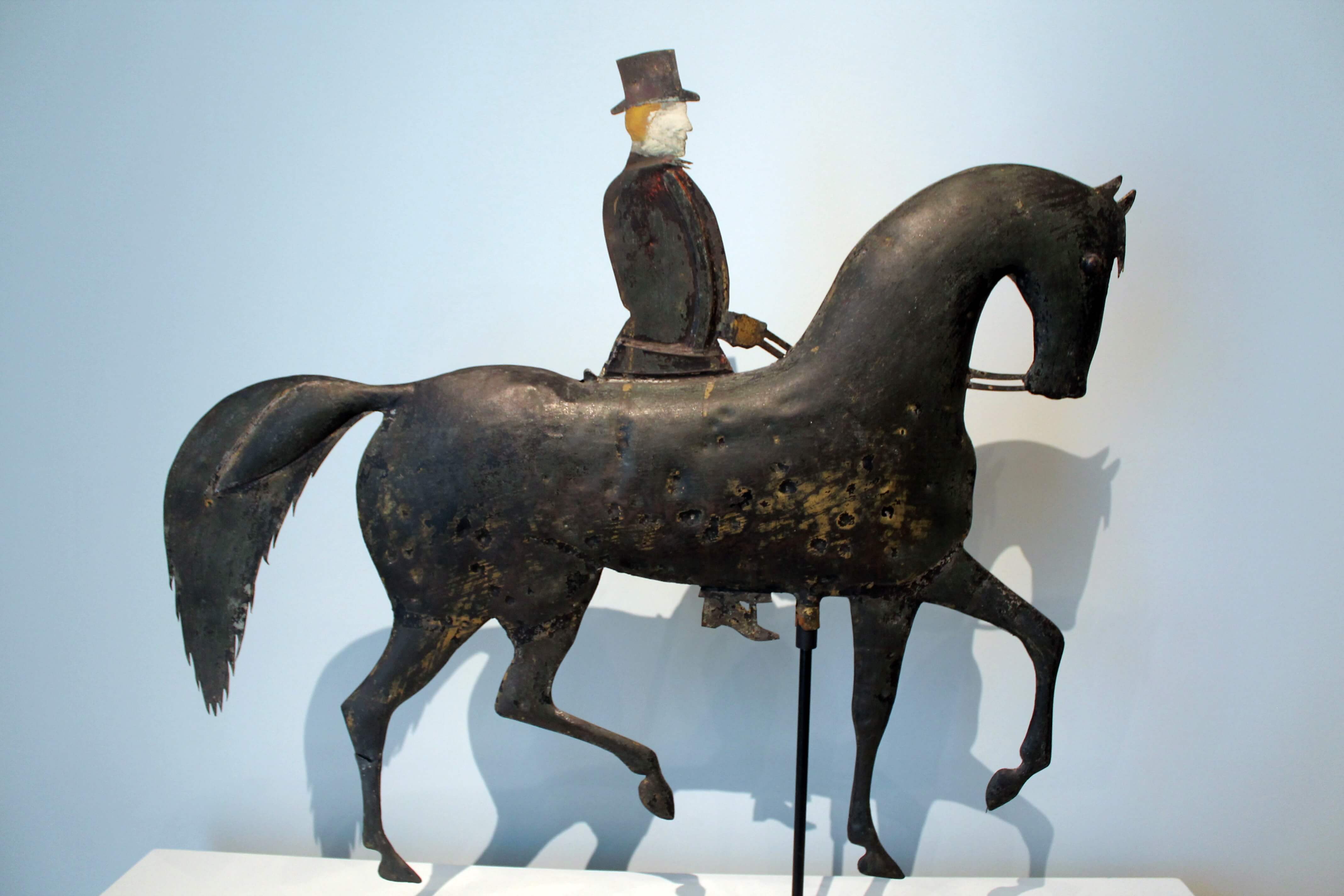 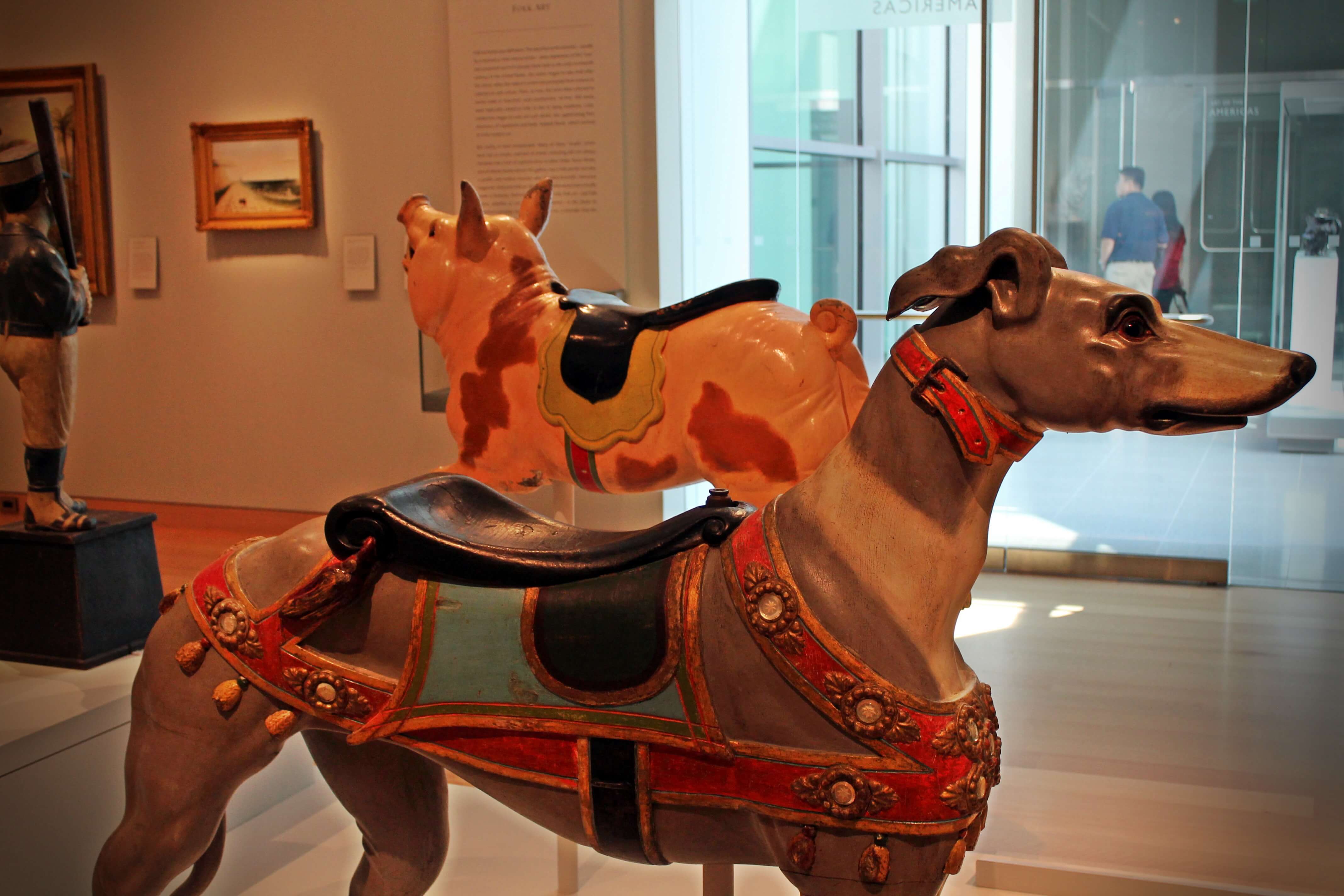 Charles I. D. Looff. American (born in Germany), 1852-1918. Carousel figure of a greyhound. Rode Island (Providence), about 1905-10. Painted wood. At the turn of the twentieth century more than 3000 carousels delighted children in  American amusement parks. All of the carousels featured hand-curved animals and Looff made some of the finest. Perhaps modeled after a Looff family pet, this greyhound wears a fanciful saddle and harness, embellished with cut-glass ornaments that would have sparked under the carousel’s electric lights. Joyce and Edward Linde Gallery (Gallery 237).

If you want to pay the MFA a visit make no mistake: the venue is enormous and you had better plan your visit in advance, especially if you’re visiting with children or wishing to see something particular. There’s a plan-your-visit page (here) on the museum’s website which includes floor-plans and all sorts of useful information that I wish I had known of, before visiting myself!