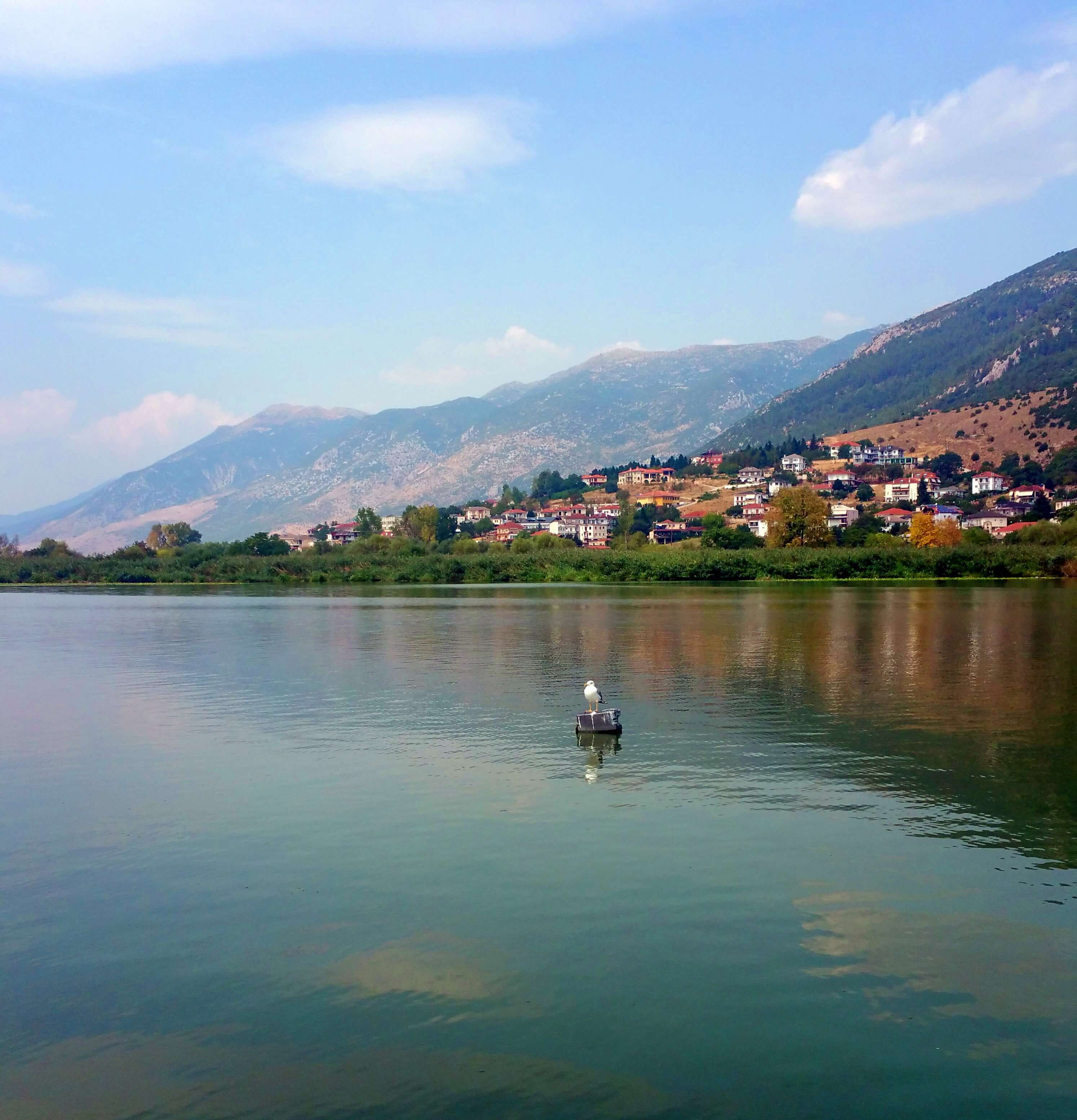 One of the first things to do when in Ioannina, no matter how cliché, is to marvel at lake Pamvotida/Pamvotis. Commonly known as the Lake of Ioannina, it is the largest lake of Epirus, located in the middle part of the Ioannina regional unit at an elevation of 1345 feet, south of the Mitsikeli mountain range. It stretches from the capital city of Ioannina in the west to the town of Perama in the north, while the remaining of its periphery is mainly farmland. The lake features small fishing ports and a ferry dock. The ferry service is pretty regular (for a 10-minute crossing) to the picturesque Island of Ioannina—the small island with no name(!)—home to 7 monasteries (the 3rd largest group in Greece, after Mount Athos & Meteora) and to Ali Pasha’s museum, filled with pine trees, stone houses, cobblestone alleys, and a natural port with as many fishing boats as it can possibly contain! 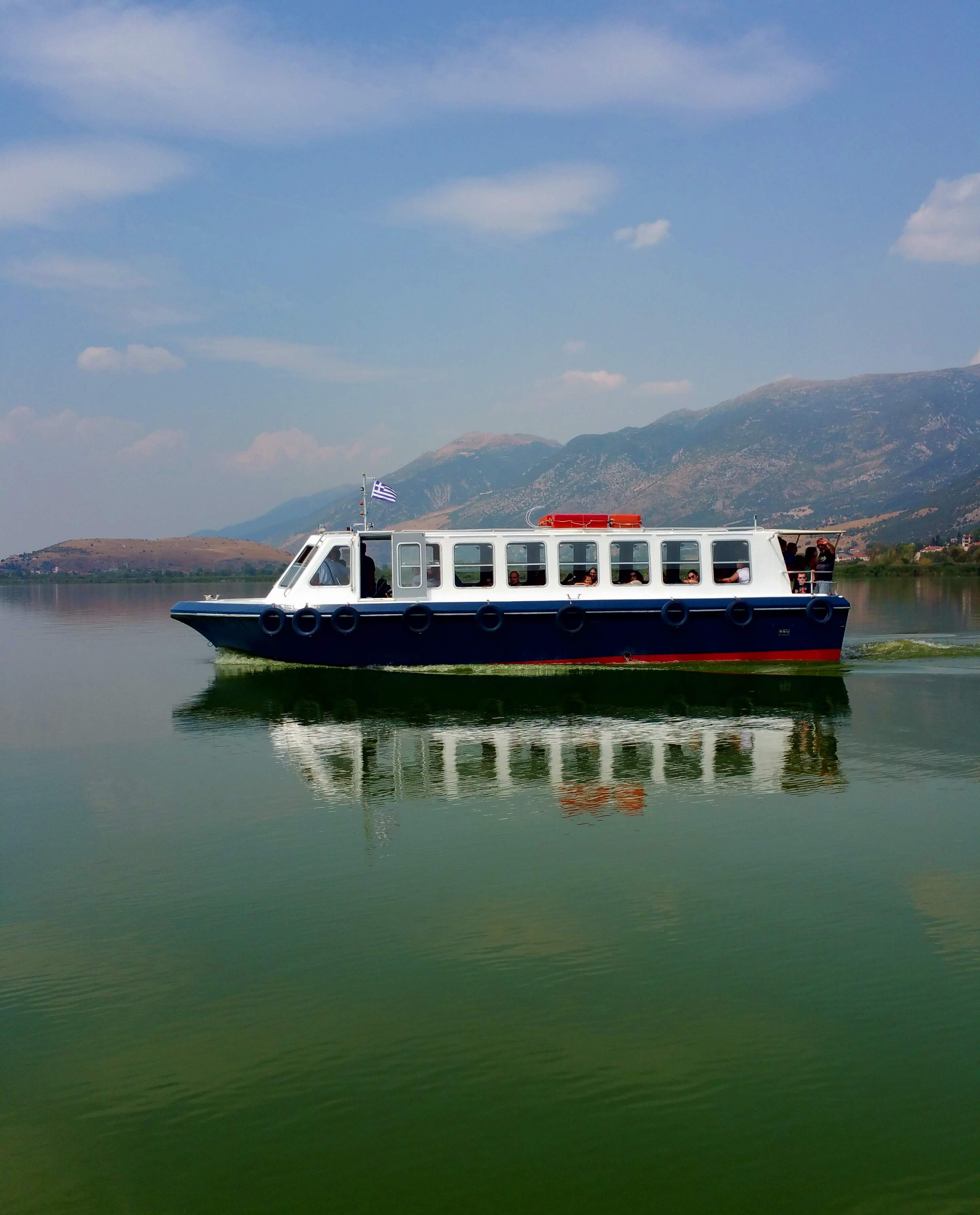 Ali Pasha Tepelenë, also known as the Lion of Epirus, was born in 1744, in Tepelenë, Albania (then part of the Ottoman Empire). His father, Veli, bey of Tepelenë, was assassinated when Ali was 14. His mother Khamco (or Chamco), a woman of Greek decent and extraordinary character, formed a brigand band to restore the political and material wealth of the family and Ali became a notorious brigand leader who attracted the attention of the Ottoman authorities.

He is known to have served the Pasha of Negroponte (current Evia), the Pasha of Delvinë (southern Albania) whose daughter he married in 1768, and to have been later appointed a lieutenant to the Pasha of Rumeli. Working his way to the top rankings, he was soon rewarded with the pashalik of Trikala and after a series of murders and intrigues, he obtained that of Ioannina as well. His son, Veli, took over Trikala and later Morea, while his other son, Muhtar, became Pasha of Lepanto (current Nafpaktos). Despite being constantly thwarted by the Souliotes, whom he finally subjugated in 1803, Ali obtained control of the Gulf of Arta and seiged the ports of Butrint (a.k.a. Buthrotum, an ancient Greek city/Roman colony in Albania), Preveza, and Vonitsa. He also gained control of the pashaliks of Elbasan, Delvinë, Berat, and Vlorë (all in Albania).

Over the years, he increased his wealth and colluded with both Greeks and Albanians as he saw fit, to extend his authority over the other Turkish “beys” and their territories. In the process, he repeatedly failed to carry out the orders of the Sultan, to whom he sent plausible excuses and many presents. He mostly acted as an independent sovereign and was treated as such by the British and the French, with whom he allied, hoping to establish Ioannina as a major sea power. By 1819 however, Sultan Mahmud II, who intended to centralize the government of his empire, was determined to remove Ali and sanctioned his assassination. His former summer retreat on the Island of Ioannina that is now a museum, is where he was eventually trapped and killed on February 5th, 1822.

The summer residence of Ali Pasha—a former byzantine chapel of St. Pantaleon on the little island of Ioannina—is nowadays a museum, namely the Revolutionary Era Museum & Museum of Ali Pasha. It features the following rooms and collections:

This below is the only preserved one, of the dozens of canons that Ali Pasha had used to fortify the island in order to defend himself against the Turks during the siege of Ioannina, in 1820-22. There are a few more canons at the citadels of the Ioannina Castle, on the mainland. (There were more than 250 canons in total, in all of the castles and fortifications around Ioannina). All of the canons are of British origin and—in their time—were of top-notch technology. They were presents from the King of England to “the Lion of Epirus”. 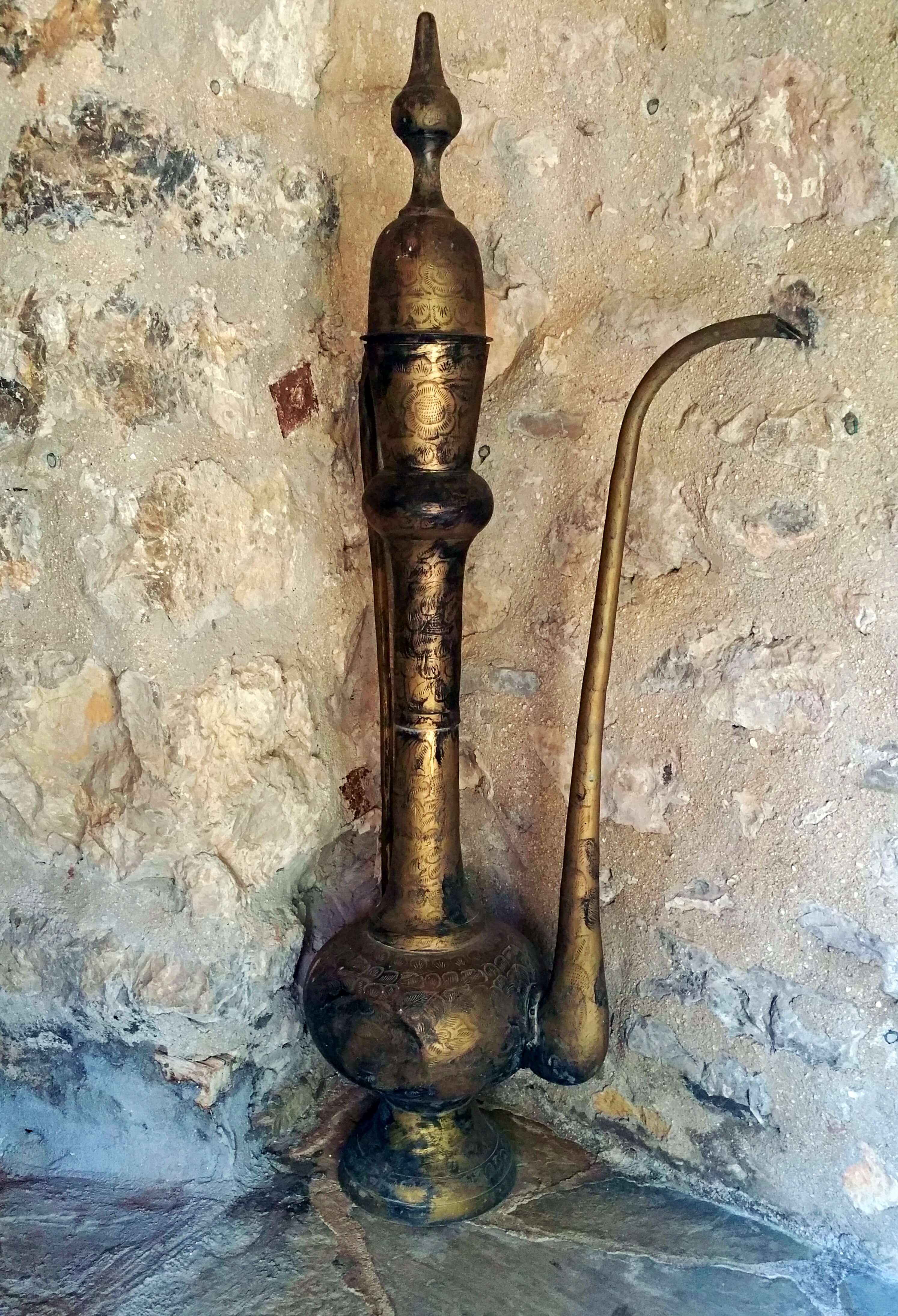 Ali Pasha’s gold muzzle-loading rifle [in Greek: καριοφίλι]. In the second photo an inscription bearing his name and the year 1804, can be seen. 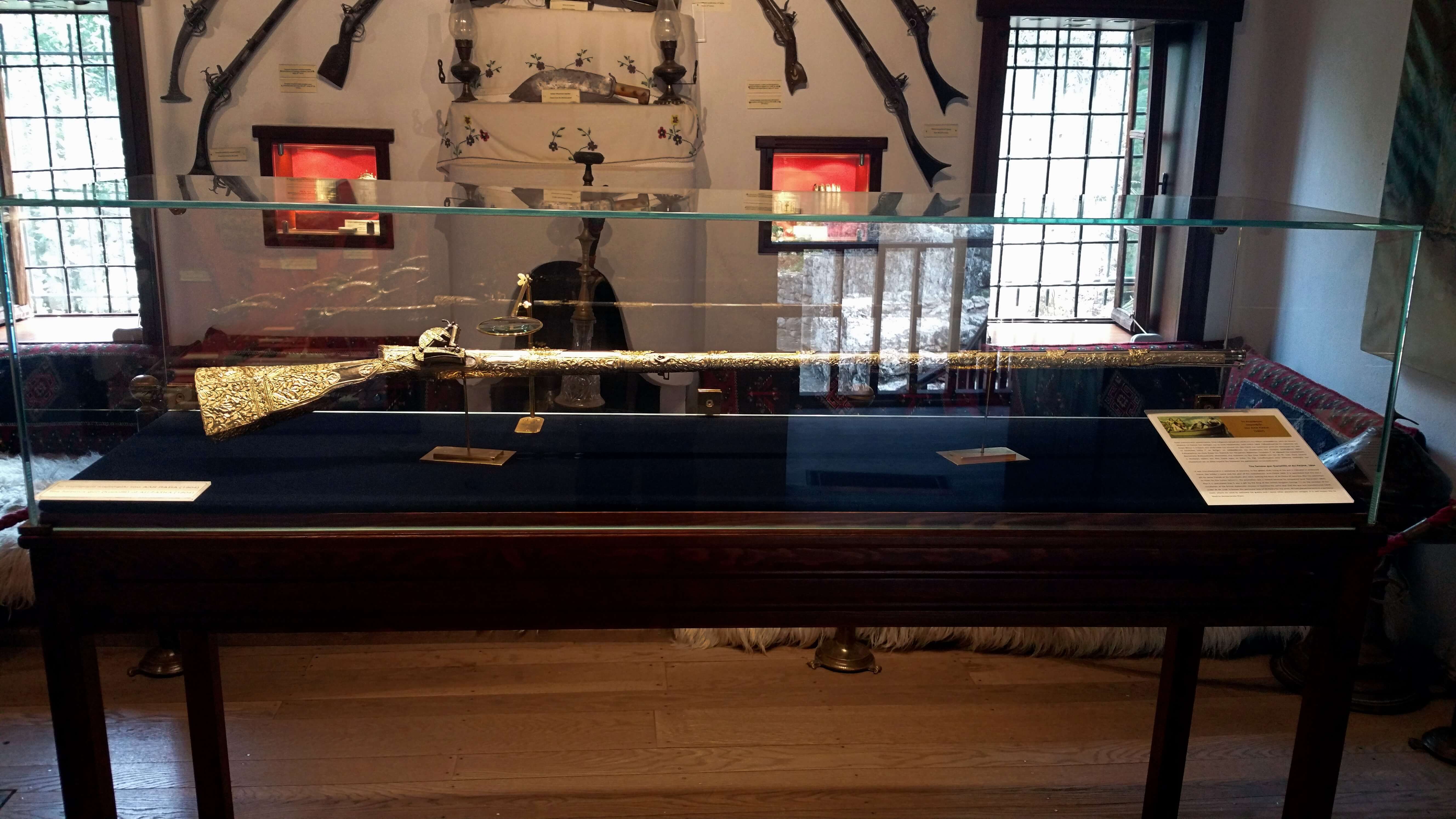 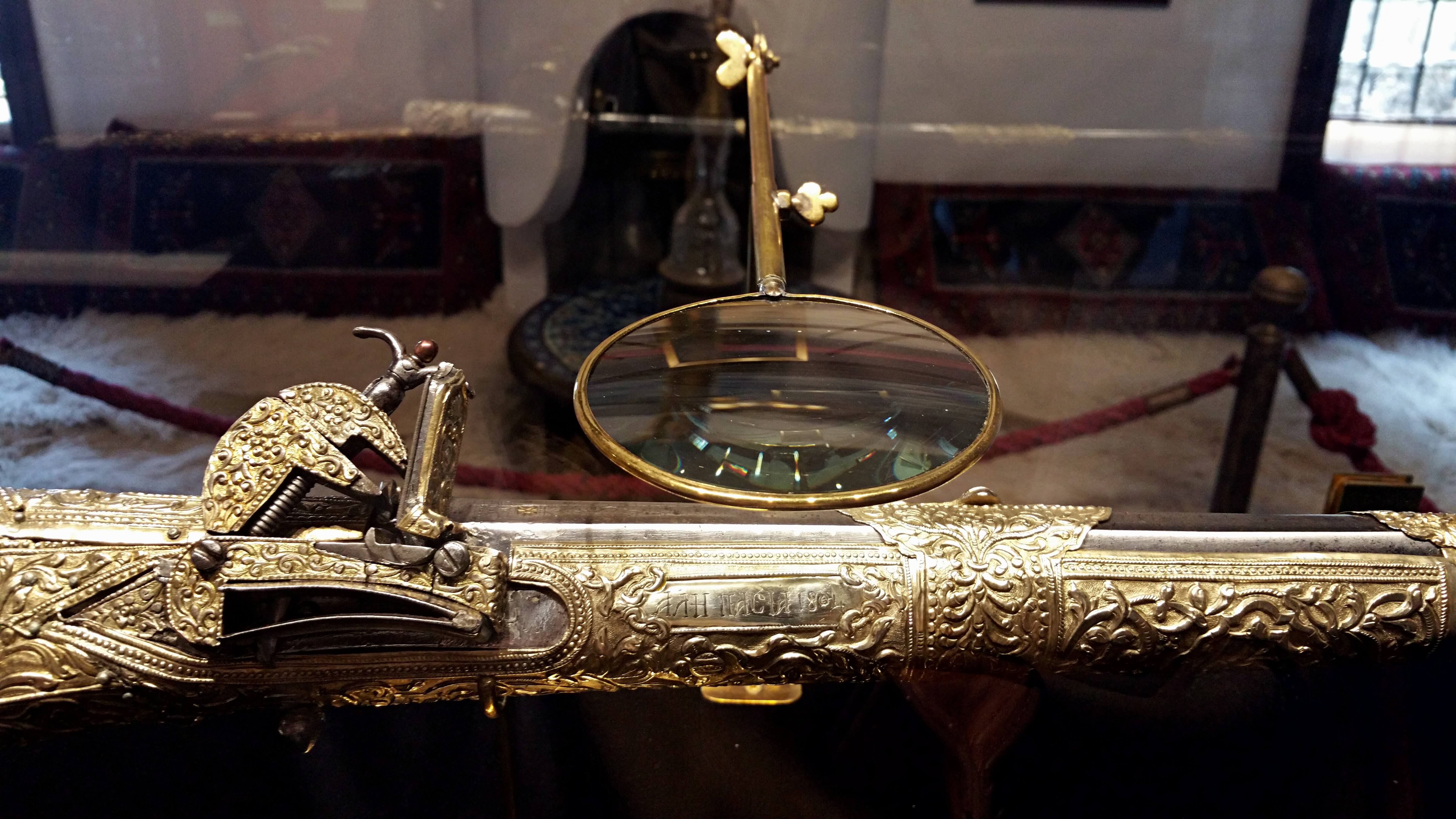 In this very room Ali Pasha lost his life. During a conflict with the Turks he was wounded and rushed in the room to receive medical care but a Turkish soldier managed to slip in the basement and shot him from bellow the floor. The actual bullet holes and fragments can still be seen at the spot on the floor. 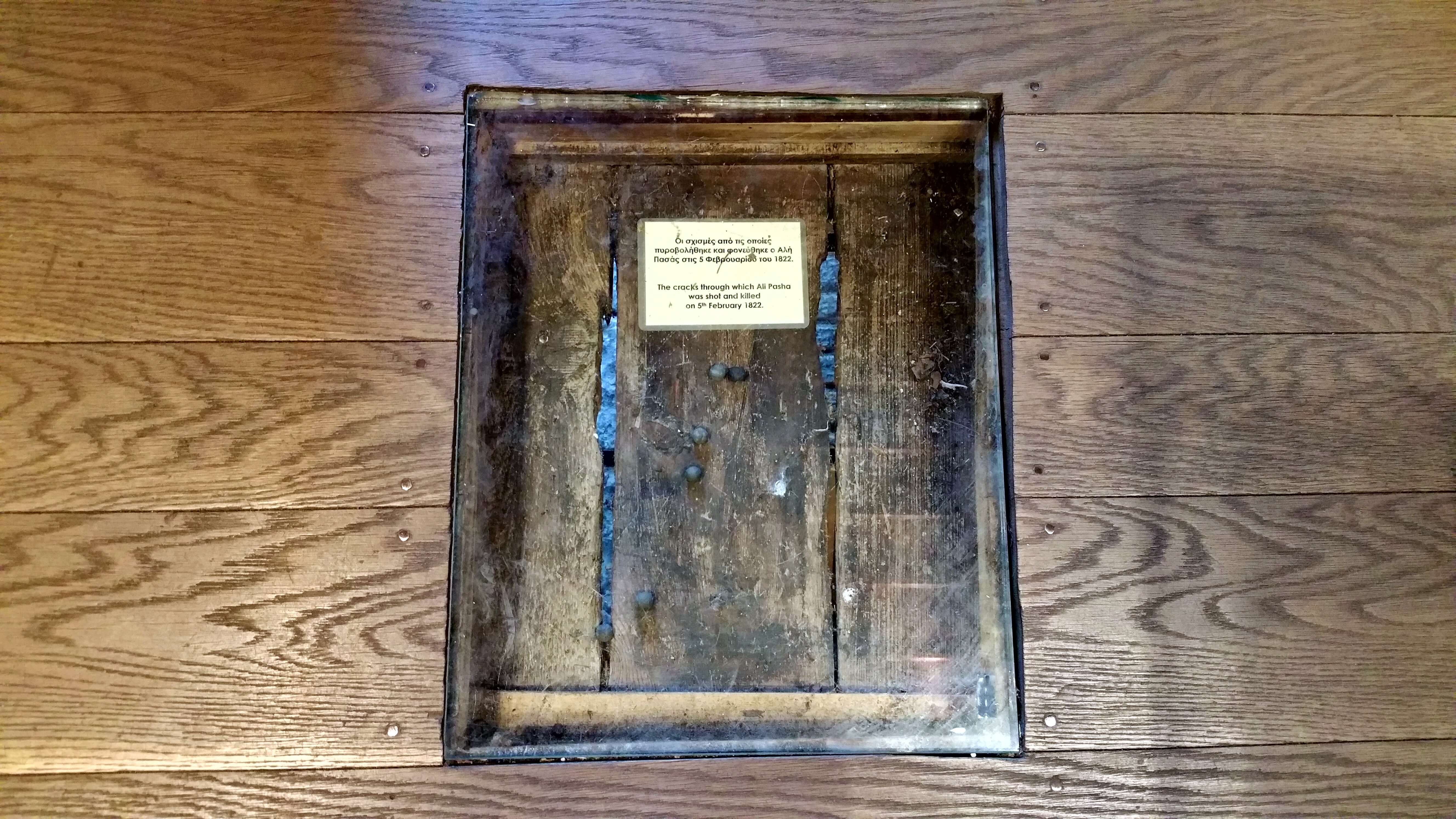 Sultan Mahmud II is the sultan who tried to suppress the Greek Revolution of 1821. He declared Ali Pasha a traitor and ordered his assassination on the grounds that he was helping the Greeks. The room below features a set of needlecraft curtains that bare his embroidered paraph and other items, like paintings, lithographies, İznik and Kütahya pottery, Persian şişhane rifles, silver-guilded turkish guns, and much more. 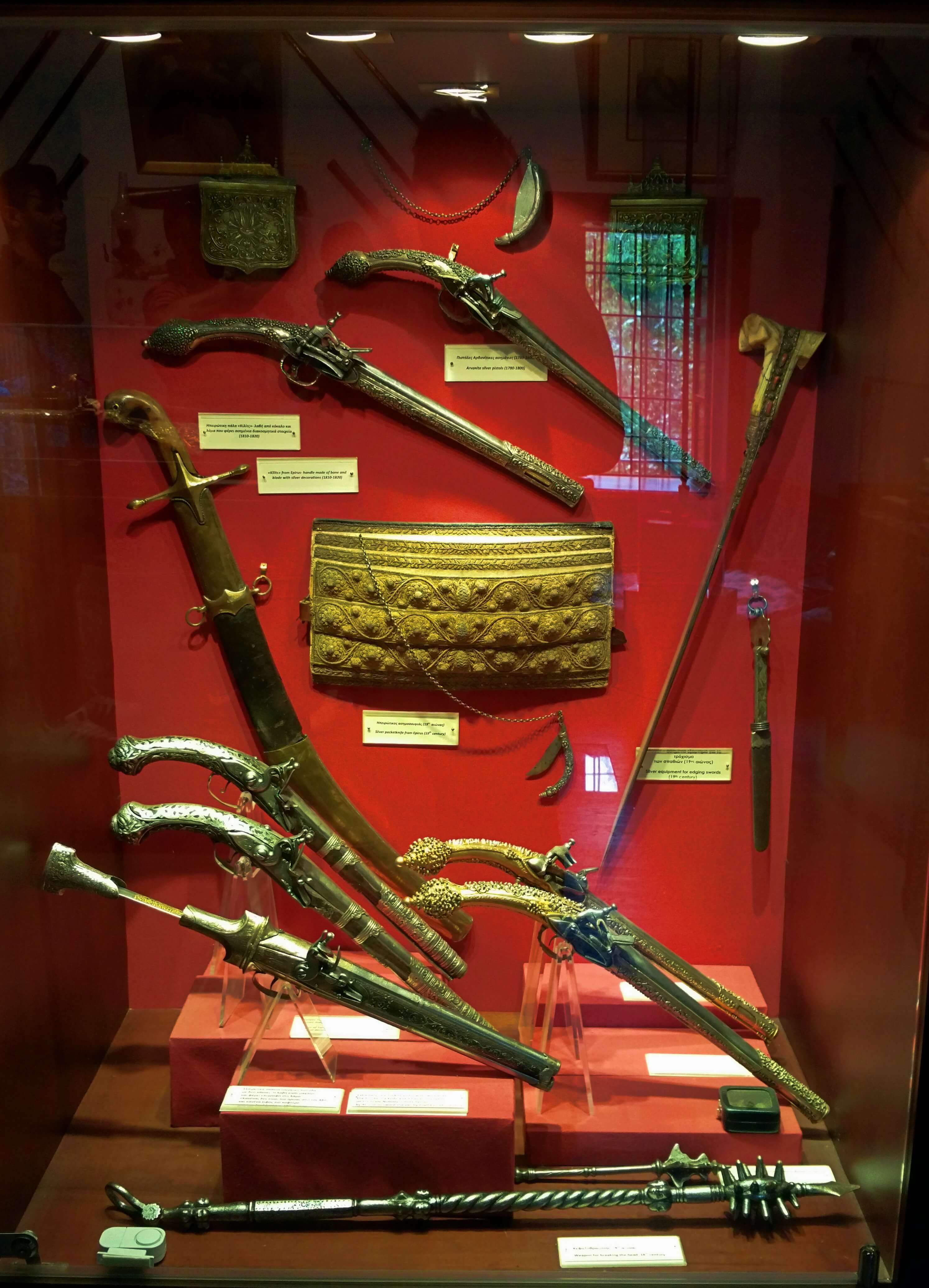 The head here exposed is that of a traitor to religion, known by the name Tepedelenly Ali Pacha.* It is notorious, that during thirty or forty successive years, this Tepedelenly Ali Pacha, had been loaded with favours by the Sublime Porte, which entrusted to him the government of several provinces and districts. Himself, his sons, and those connected with them, have received numerous benefits from the Sultan.

Notwithstanding, far from showing any gratitude, he has constantly opposed the will of the Sublime Porte, using every kind of perfidy and treason to oppress the people whom he governed. No history, of any period, presents an example of perverseness equal to his. Acts of treachery and cruelty, such as he has committed, have never been seen or heard of. Always restless and turbulent, wherever there was any disturbance he took part in it—sometimes openly, sometimes secretly—either encouraging it by money, or fomenting it by underhand proceedings. Yielding to a guilty ambition, he was not content with the provinces entrusted to him, but usurped the government of several adjacent districts, into which he brought disorder.

He attempted on the lives of a number of poor Rayah, who are a sacred deposit, placed in our hands by Almighty God; others he dishonored, and despoiled them of their goods. In short, he ruined entire families. This was the case, not only in Albania, but in various other districts over which he extended his domination, such as Epirus, Manastir,** and Thessaly. The unheard of violence and outrages of Ali Pacha forced the inhabitants of Albania, and the bordering provinces, to emigrate. The Sublime Porte, informed of his tyranny, made the strongest representations to him at different times, on the necessity of altering his behavior; but far from lending his ear to these salutary counsels, Ali Pacha persevered in his insolence, and, no longer preserving any measures, even pushed his audacity so far as to fire shots in Constantinople (at the residence of the Caliph) on individuals who disapproved of his conduct and had come to seek asylum in the capital. This clear violation of all laws, divine and human, rendered the punishment of Ali Pacha indispensable. He was deposed, and the provinces he governed given to other Vizirs. It was then that, throwing off the mask, he raised the standard of revolt; and with the design of realizing all the wicked projects he had long meditated, he entrenched himself in the city of Yannena, previously fortified with that view, thinking, in his rashness, that he could there resist the power of the Sublime Porte, his benefactor. The spirit of vengeance which animated Ali Pacha displayed itself in all its extent at the moment the rebellion of the Greeks broke out. He sent immense sums to the infidels of Morea, as well as to the Suliotes, to excite them to rise against the Mussulmans.*** With that impious action having filled up the measure of his crimes, the sacred laws and the safety of the State demanded his death; and Hurşid Ahmed Pacha, the victorious Seraskier of Roumelia, who had made him prisoner, executed the order given to this effect, by virtue of the sacred Fetvâ which pronounced his sentence. It is thus that the Mussulman people is for ever delivered from the perfidy and tyranny of the traitor Tepedelenly Ali Pacha.

A rather unsettling function of hooks…

The odàs is a typical Yannena living room of the Ottoman Era. Fitted for winter time, the winter odàs has built-in beds which also function as couches, lush carpeting, and a fireplace. The figurines of Ali Pasha and Kyra Vasiliki are dressed in traditional costumes. 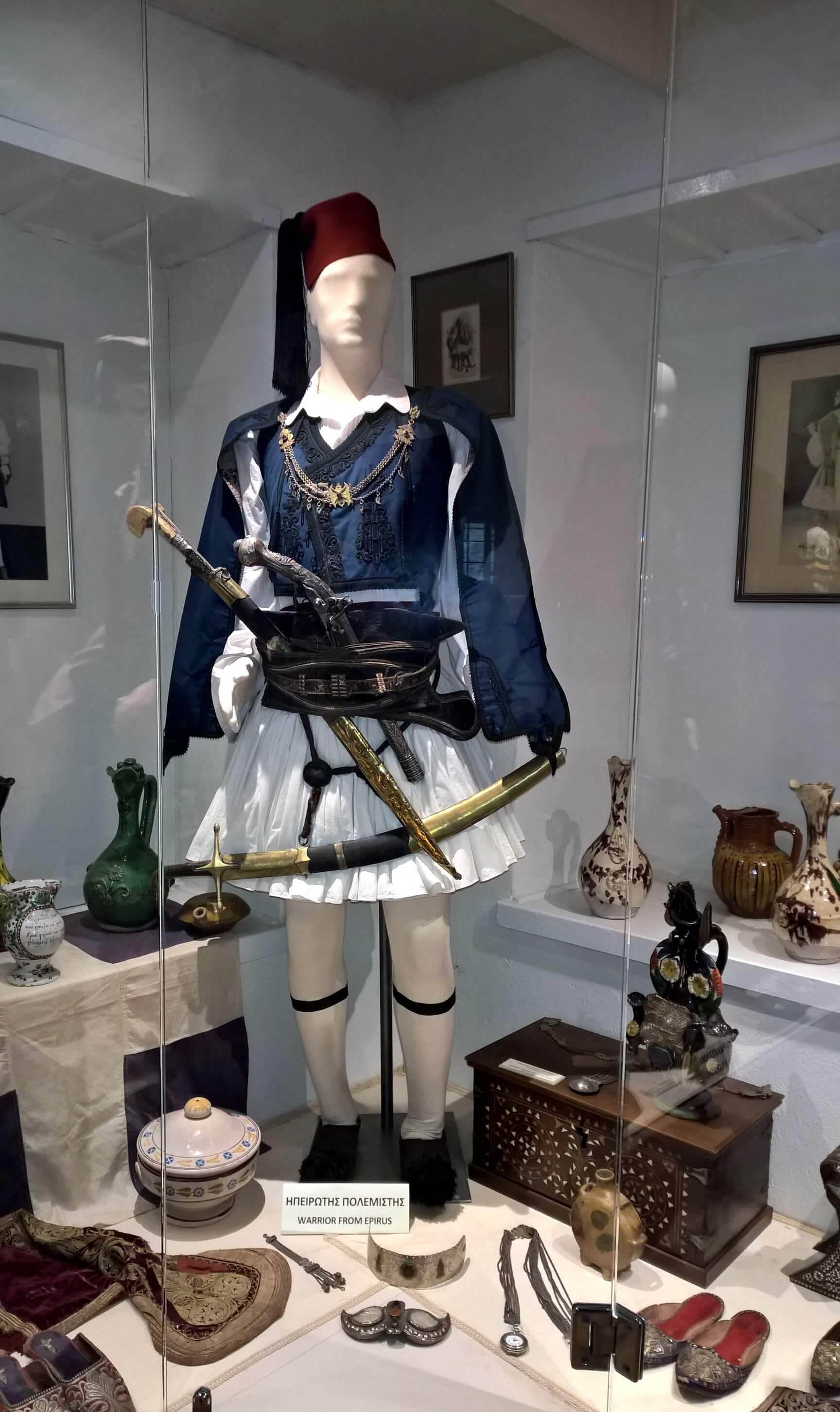 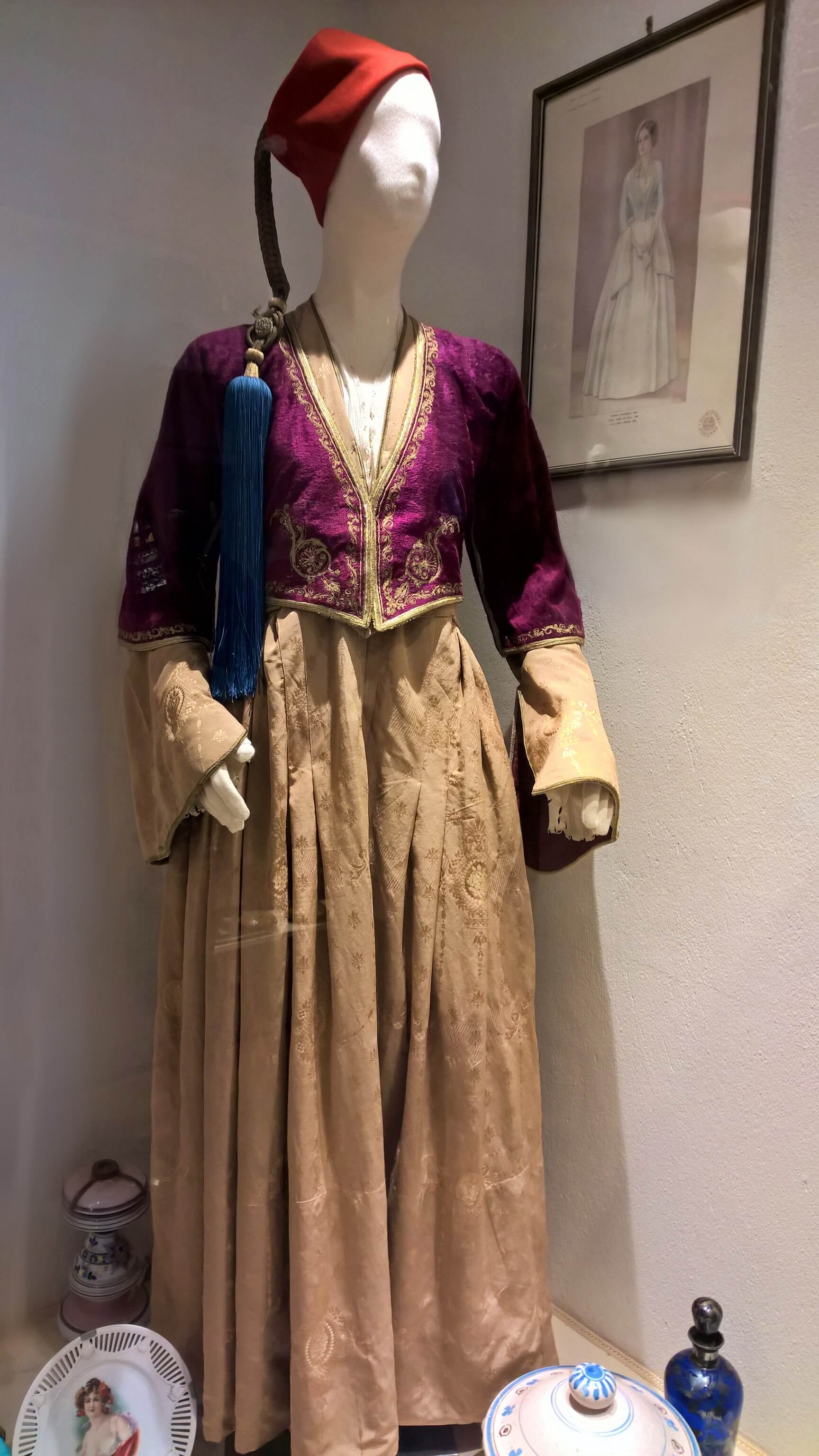 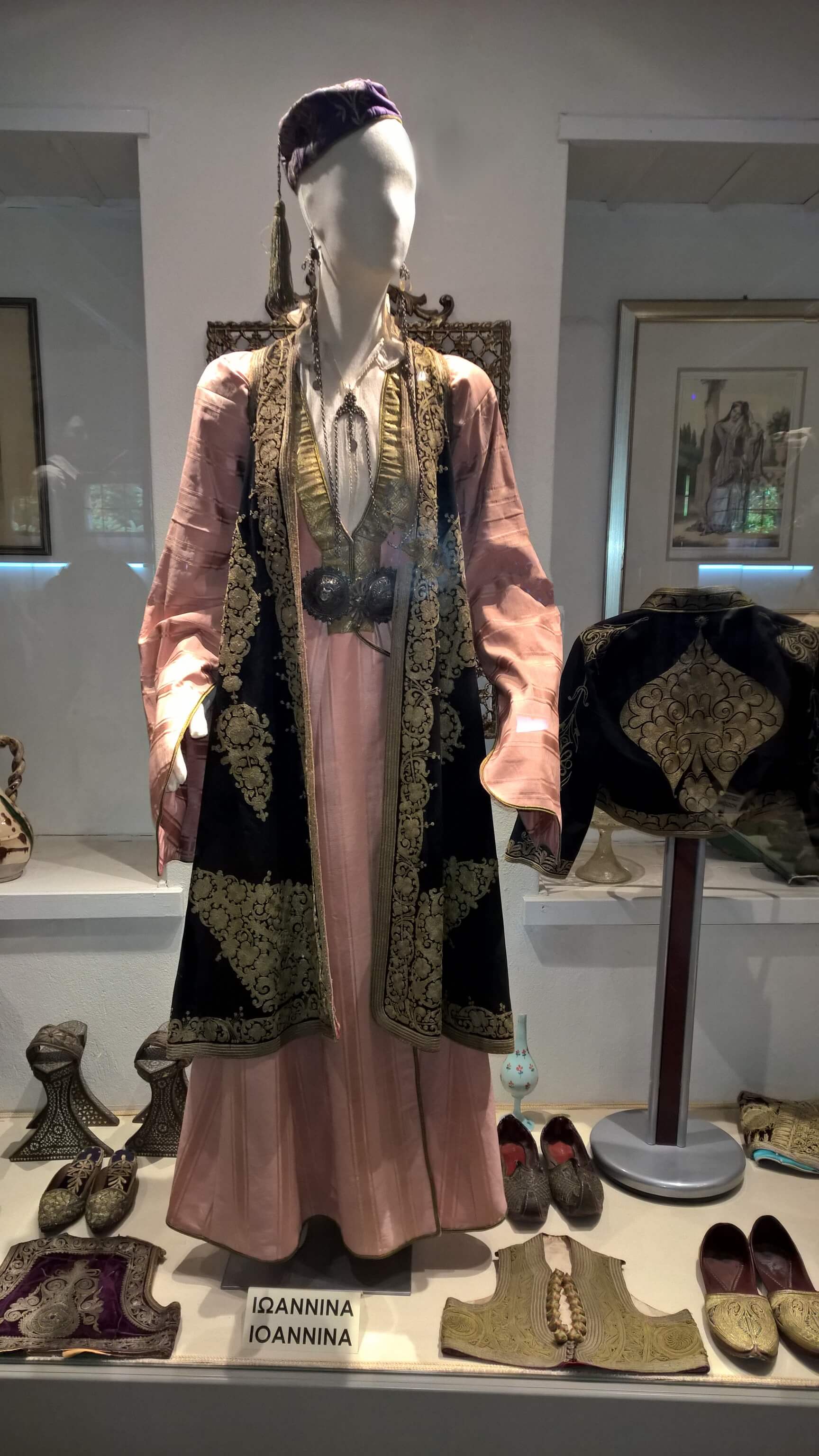 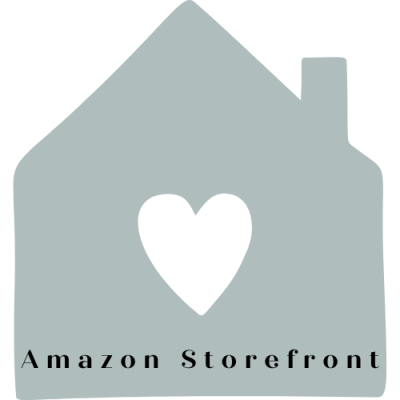