Levent is one of the main business districts of Istanbul, located on the European side. It is a part of the municipality of Beşiktaş which is situated to the north of the Golden Horn, at the western shore of the Bosphorus strait. Levent is in direct competition with the nearby Maslak business district, for new skyscraper projects!

İstiklal Avenue is also a popular venue for all sorts of parades, marches, gatherings and protests in the city as it ultimately leads up to Taksim Square (starting from the medieval Genoese neighbourhood, around Galata Tower, all the way up to Taksim).

Gülhane Park (in Turkish: Gülhane Parkı meaning “Rose House Park” from the Persian: Gulkhāna, meaning “house of flowers”) is a historical urban park in the Eminönü district of Istanbul; it was once part of the outer garden of the Topkapı Palace and mainly consisted of a grove —a section of the outer garden was later turned into a park by the municipality and opened for the public in 1912. An actual rose-greenhouse, present on the grounds, was the place where Grand Vizier Mustafa Reşid Pasha –leading statesman, diplomat & reformer– proclaimed the Edict of Gülhane, in 1839 (the edict that launched the Tanzimat reforms, aiming for the emancipation of non-Muslim subjects and the thorough integration of non-Turks into Ottoman society by enhancing their civil liberties and granting them equality throughout the Empire). The Museum of The History of Science and Technology in Islam is located in the former stables of the Topkapı Palace, on the western side of the park. 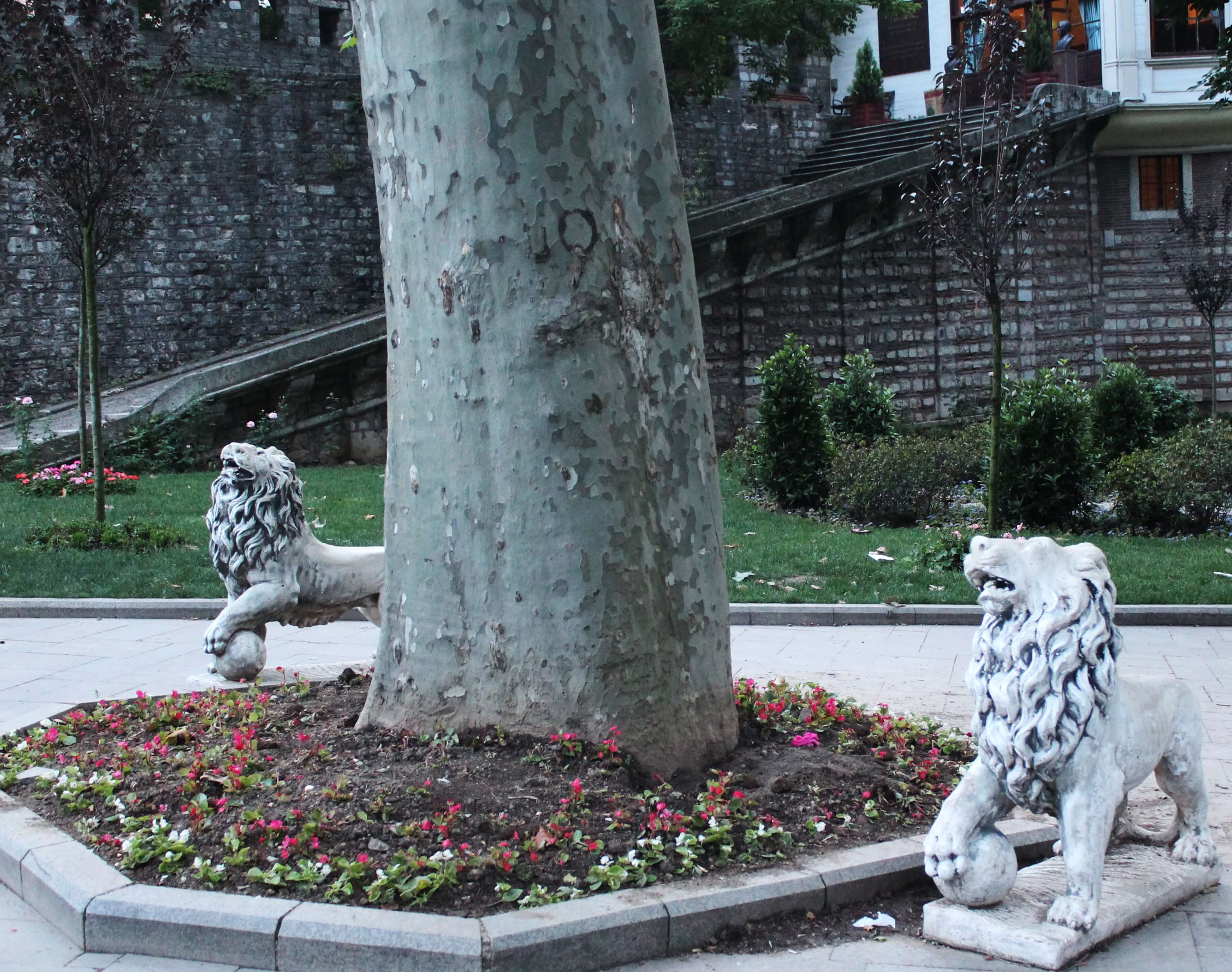 Alemdar Street is a main, picturesque road that passes in front of Gülhane Park’s south entrance and leads all the way up to the crossroads of Hagia Sophia & Sultan Ahmed Square.

As well as a royal residence, the palace was a setting for state occasions and royal entertainments. It is now a museum, holding important holy relics of the Muslim world, including Muhammed’s cloak and sword. It was proclaimed a UNESCO World Heritage Site in 1985.

The palace complex consists of four main courtyards and many smaller buildings. At its peak, the palace was home to as many as 4,000 people and covered a large area with a long shoreline. It contained –among others– mosques, a hospital, bakeries, and a mint. Construction began in 1459, ordered by Sultan Mehmed II. It was originally called the “New Palace” (Yeni Saray) to distinguish it from the previous royal residence. It received the name “Topkapı” (Cannon Gate) in the 19th century, after a (now lost) gate & shore pavilion.

The Imperial Gate (Bâb-ı Hümâyûn) is the main entrance on the palace’s Hagia Sophia side, leading to the 1st Courtyard of the Topkapi complex. It was built in the time of Sultan Mehmed II whose tughra (the calligraphic monogram, seal or signature of a sultan) can be seen on the marble covered frame right atop the passage, along with the tughra of Abdül Aziz I, the 32nd Sultan of the Ottoman Empire who reigned from 1861 to 1876 and renovated the gate (the oval-shaped emblem). Right above it (in the rectangular panel), the inscription in Arabic reads:

“By the grace and assent of God and by His approval, with the aim of establishing peace and tranquility, the foundations of this auspicious citadel were laid and erected in the blessed month of Ramadan in the year 883 [November-December 1478] at the command of the son of Sultan Murad, Sultan Mehmed Khan, the sultan of the land and ruler of the seas, the shadow of God extending over men and demons, God’s deputy in the East and in the West, the champion of water and soil, the conqueror of Constantinople and the father of that conquest, Sultan Mehmed —may God make his reign eternal and exalt his residence above that of the highest stars in the firmament.”

Above this, in a lunette, verses 45-48 of the Qur’an’s Surah al-Hijr (The Rocky Tract) are inscribed in müsennâ (mirrored) script.

Indeed, the righteous shall find themselves in gardens and springs. “Enter in peace and tranquility” [they will be told]. We shall dispel any grudge they may have in their hearts, [so they will be] brothers, sitting on thrones facing each other. No weariness will come upon them , nor will they [ever] be cast out of there .

Hagia Irene (alternative spelling Hagia Eirene, in Greek: Aγία Ειρήνη meaning “Holy Peace”, in Turkish: Aya İrini) is located in the 1st courtyard. It was burned down during the Nika revolt in 532. Emperor Justinian I had the church restored in 548. It was again heavily damaged by an earthquake in the 8th century, and it dates to its present form, largely from repairs made at that time. It is the only example of a Byzantine church in the city that retains its original atrium.  After the Fall of Constantinople in 1453 by Mehmed II, the church was enclosed inside the walls of the Topkapi Palace and served as the Royal Armoury. Today, Hagia Irene serves mainly as a concert hall for classical music performances, due to its extraordinary acoustic characteristics and impressive atmosphere and also operates as a museum, open to the public on a daily basis since January 2014!

Serving the royal family as well as the thousands of palace employees, the Imperial Kitchens complex (Mâtbah-ı Âmire) sports 10 domes with equivalent spires/chimneys. It comprises of 10 sections: to name but a few, the Main Pantry (Kiler-i Âmire), the Dessert & Candy Room (Helvahâne) –which I will be coming back to, wait for it!– and the Sherbet & Jam Room (Şerbethane). As a precautionary measure against any assassination attempts on the Sultan, the food prepared in the Imperial Kitchens was first tested by the cooks and then by the royal taster (çâşnîgîr) —not an accredited enough position, if you ask me! Some 60 types of food were typically served to the Sultan, and as a matter of fact, he would not eat them all! Some he would only look at, while others he would merely taste, and whatever was left over would be given to dignitaries according to protocol. Today the kitchens are housing a magnificent collection of Chinese porcelain and other china & glassware imported from Central Asia through the legendary Silk Route. Unfortunately, taking pictures is not allowed in any of the exhibitions/museums of the Topkapi complex. Now let me get back to the Confectionery House (Helvahâne) details for a minute… brace yourselves!

In the final division of the Imperial Kitchens, the Confectionery House, there was an entire company of workers including 6 master chefs and up to 100 apprentices whose sole duty was to prepare candies, halva, pastries and syrups. In the winter, they would make a gumlike candy called macun by using sugars and flavours obtained from roses, musk, poppies, galangal root (Alpinia Officinarum), Indonesian long peppers (Piper Longum) and various other spices. The macun would be offered to the Sultan, the members of the Imperial Council and the officials of the Inner Palace. Another famous kind of confections prepared in the Kitchens, was the lokma (a fried-dough pastry soaked in syrup of honey and cinnamon —sound like “loukoumades” much??) and Noah’s pudding, known as aşure in Turkish. During Muharram, the first month of the Islamic calendar, aşure with honey, sugar & musk would be prepared especially for the Sultan and the inhabitants of the Harem!

The 4th Courtyard of the palace complex was kind of an innermost private sanctuary for the sultan & his family, and consists of gardens, terraces & kiosks (aka pavilions).

The Yerevan Pavilion {aka The Revan Kiosk} was constructed in 1636 to commemorate Sultan Murad IV‘s victory at the city of Yerevan in modern-day Armenia. It was used to store the Sultan’s ceremonial turbans as well as being the space where the Holy Relics were cleaned in the month of Ramadan.

The terrace among The Yerevan Pavilion, The Bagdad Pavilion and The Iftar Pergola* (aka The Fast Breaking Pergola, where Sultans would break their fast in the evening –a meal known as iftar– whenever the month of Ramadan fell in the summertime), onto which the double-columned portico of the Sultan’s Privy Room(s) opens, is the highest spot in the Courtyard and it’s called the Royal Hall or the Marble Hall.

The Baghdad Pavilion {aka The Baghdad Kiosk} , was originally built to commemorate the re-conquest of Baghdad by Sultan Murad IV in the mid-17th century and it is Topkapi Palace’s best preserved building.

The Circumcision Chamber was built in the time of Sultan Suleiman the Magnificent (r. 1520-1566). It has undergone various restorations, acquiring its current appearance in the time of Sultan Ibrahim (r. 1604-1648). The name “Circumcision Chamber” was not given until later when the space was used for the circumcision of the sons of Sultan Ahmed III (r. 1703-1730).  It is often confused with the Privy Room because it was in fact used as such by the Sultans in the summertime. It opens up to a verandah (roofed porch) with a spectacular view up the Golden Horn, where the Sultan took his breakfast during the summer months.

*The İftar Pergola {aka İftar Kiosk or İftar Bower} is one of the most popular places of the Royal Hall and usually hundreds of visitors get crammed under it, to get a picture or two! It was indeed very crowded by the time I got to it plus it had just started to rain, so I never managed to snap a decent shot! Here’s an image from the Topkapi Palace Museum’s official website, to give you an idea:

The Sofa Pavilion {aka Kara Mustafa Pasha Pavilion, Kara Mustafa Pasha Kiosk or Terrace Kiosk}, part of which can be seen in the background below, was built sometime during the 1676-1683 Grand Viziership of Kara Mustafa Pasha.  It features Louis XV tables, candelabras and cabinets and it was the first example of a style that has since come to be called “Turkish Rococo” and it had great influence on 18th century residential architecture!

**A type of beanie or seamed cup

Nuruosmaniye Street (in Turkish: Nuruosmaniye Caddesi) is one of the major streets leading to the Grand Bazaar, with a pedestrian boulevard section full of stylish, high-end shops featuring antiques, traditional crafts, furniture, locally sourced art, textiles, carpets and jewellery. It owes its name to the Nuruosmaniye Mosque (in Turkish: Nuruosmaniye Camii, meaning ‘The Light of Osman’, after Sultan Osman III, but also because of its many windows which let a lot of light inside the mosque’s hall).  It is considered one of the finest examples of mosques in Ottoman Baroque style. It was built by architect Mustafa Ağa and the Greek architect Simeon Kalfa, on one of the seven hills of Istanbul. 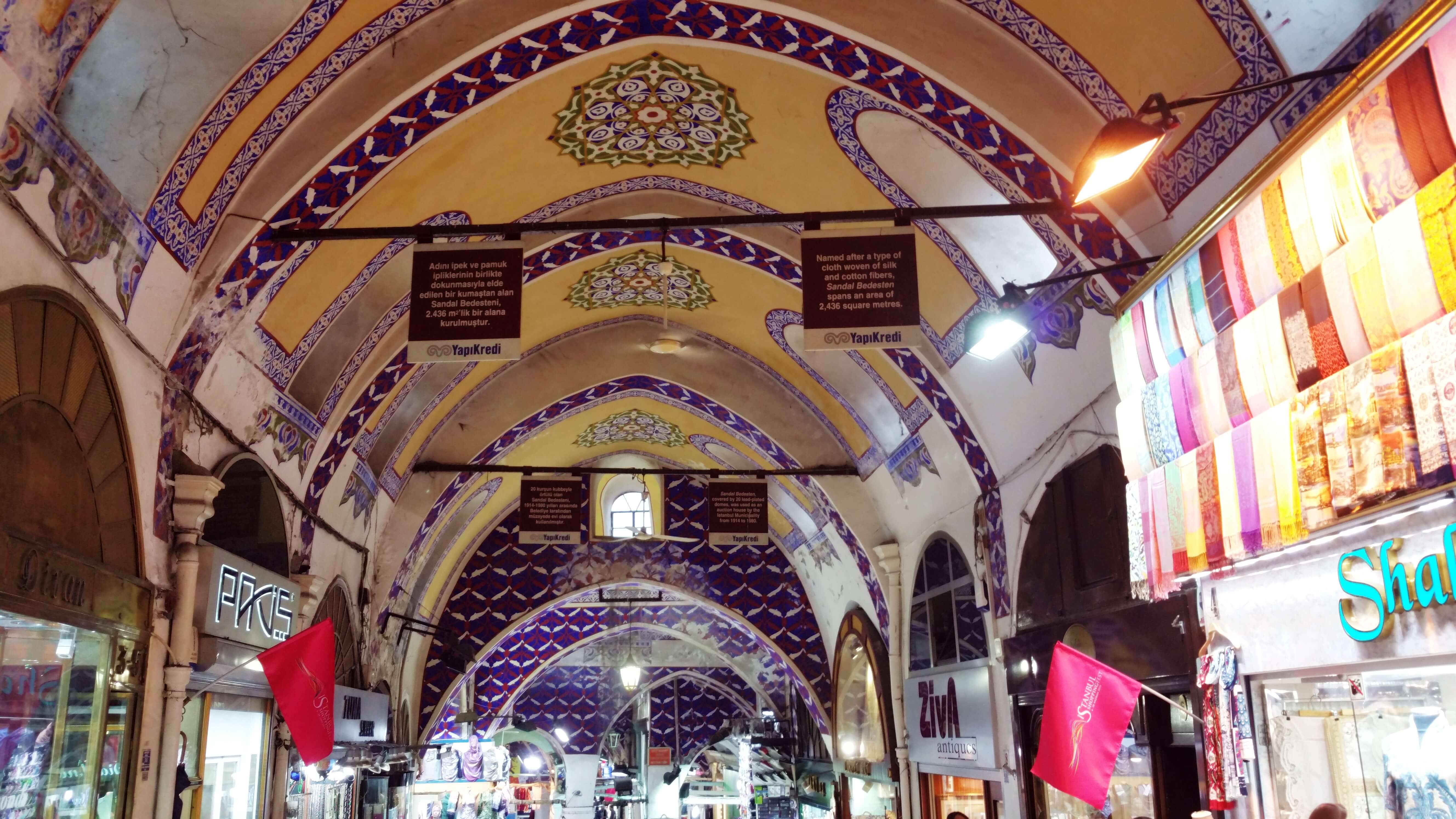 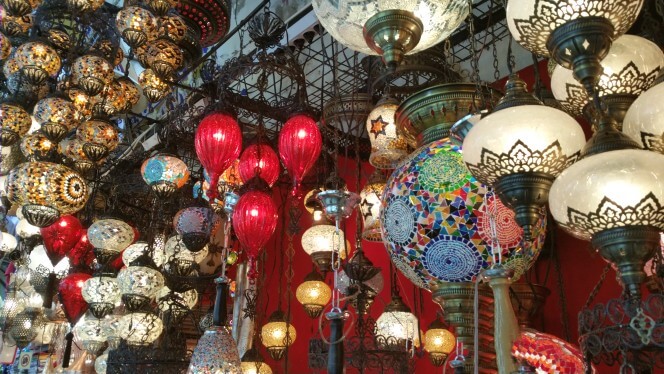 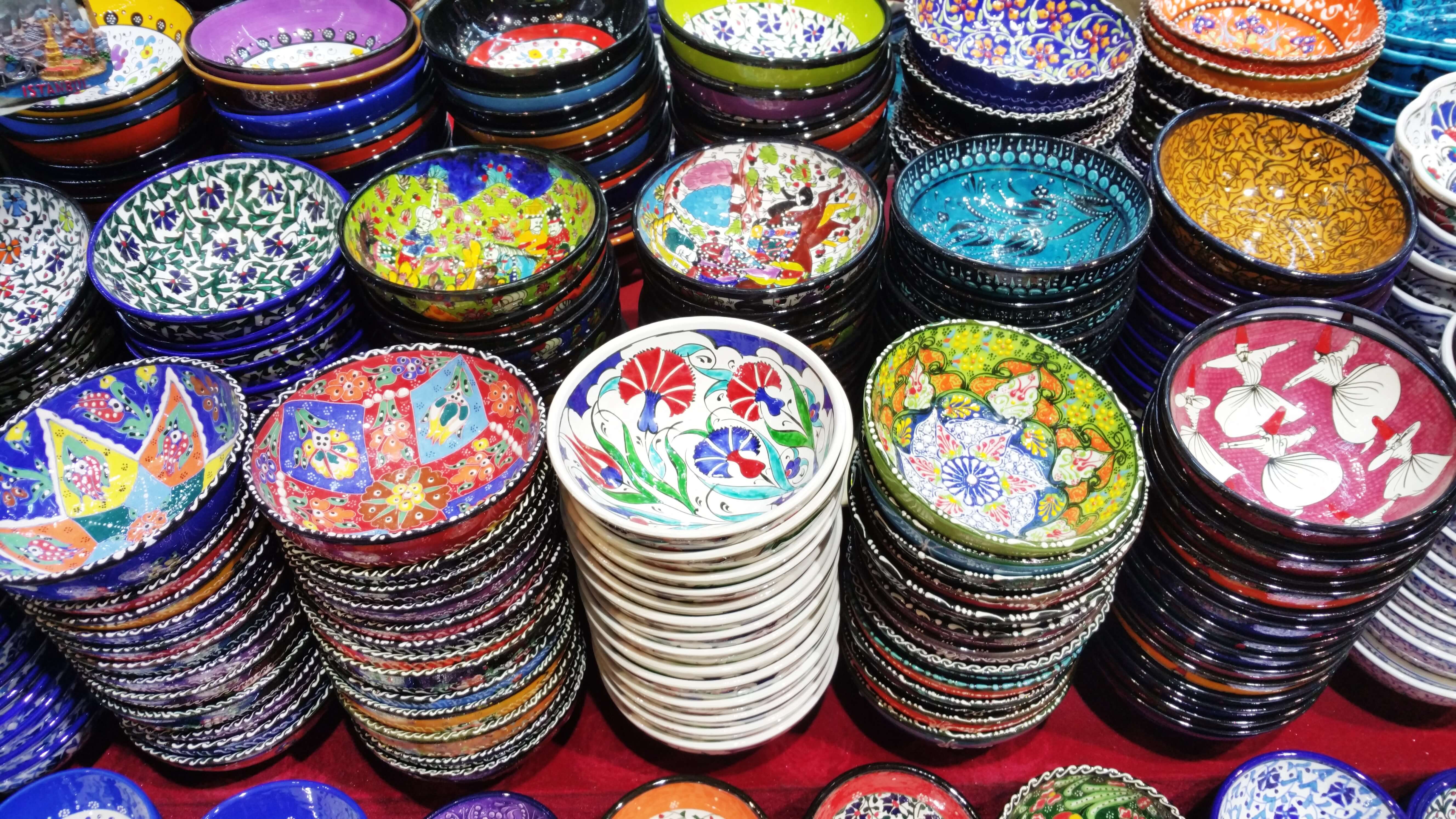 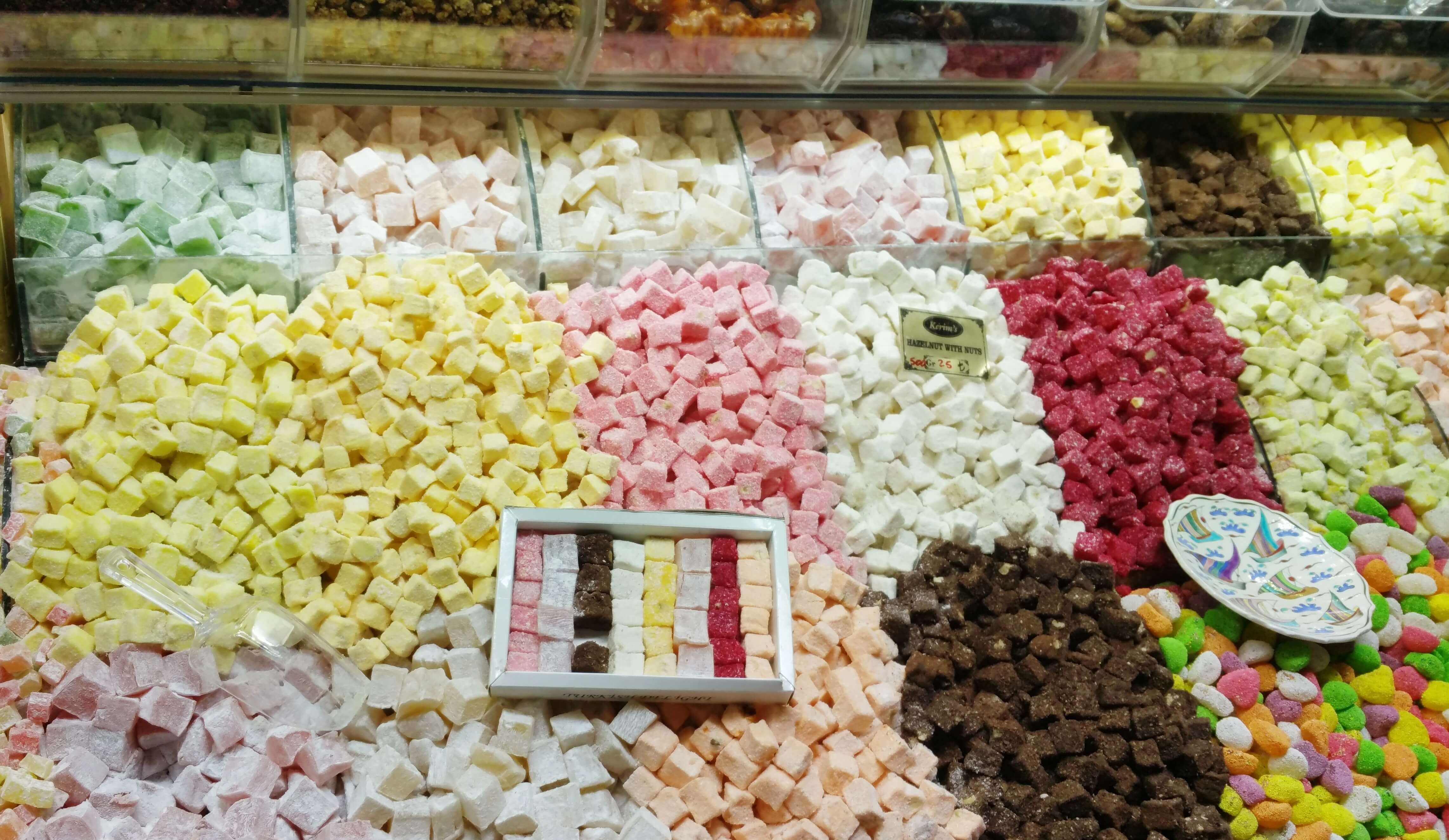 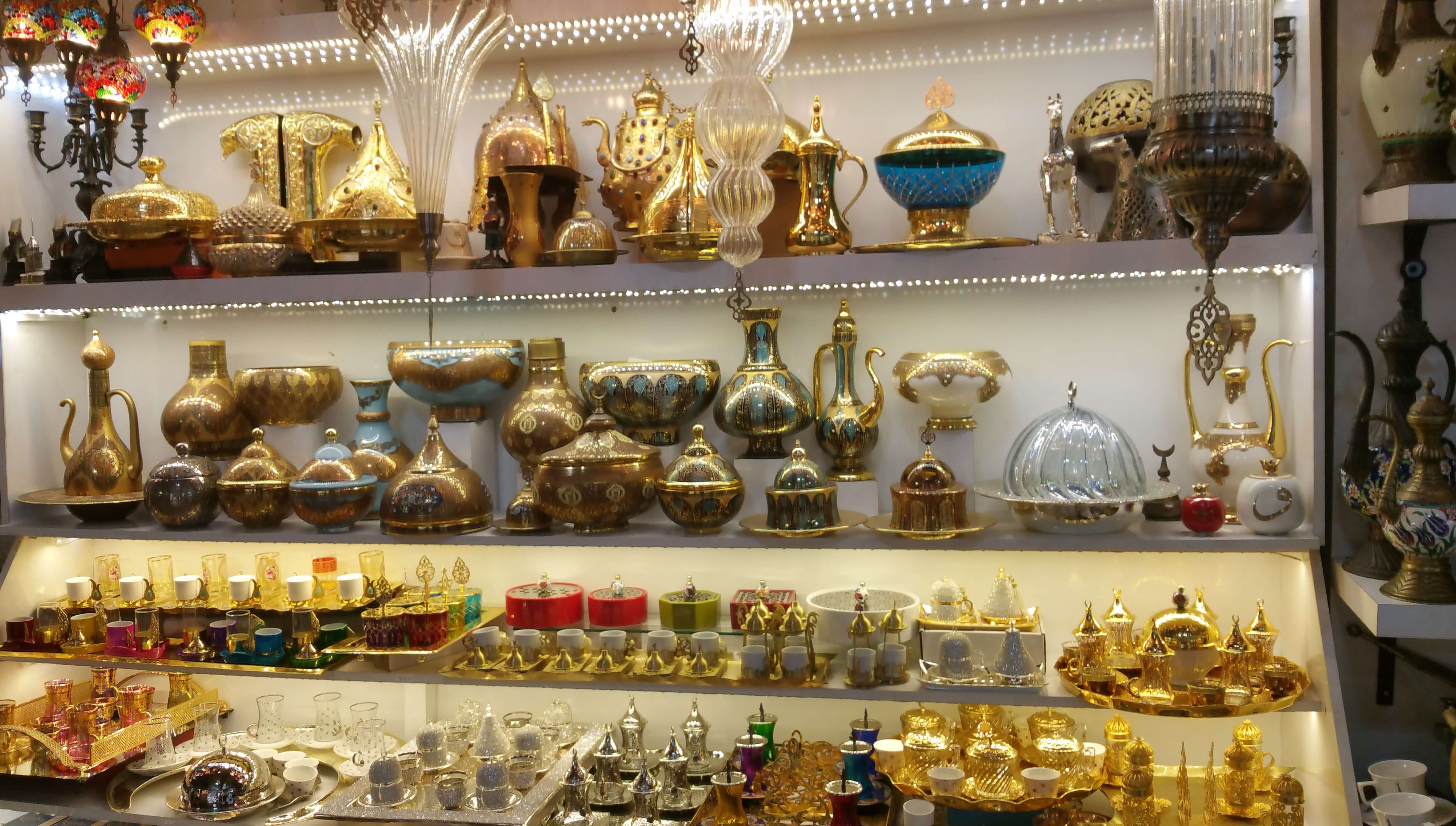